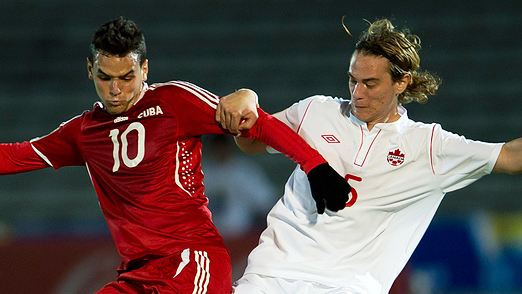 Stanese ‘beyond excited’ at MNT call-up

It was an early morning wakeup call that Daniel Stanese’s parents likely didn’t mind receiving when their son called them up to inform them of the news that he was being called into a Canada’s Men’s National Team camp.

Stanese, a 19-year-old centre back who currently plays with the reserve team of FC Augsburg of the German Bundesliga, was a late addition to the camp after veteran defender Dejan Jakovic had to pull out with an injury.

“I was actually beyond excited. I called my parents and it was like three in the morning in Vancouver,” Stanese said during the team’s off day on Sunday in London. “It’s been really good. I was really nervous at first to get into that first training session.”

Head coach Benito Floro has called in a number of younger players in his first two camps as Canadian head coach. Stanese, along with 18-year-old Samuel Piette are the two teenagers currently in camp with Canada in advance of Tuesday’s Men’s International Friendly against Australia but they were also joined earlier in the camp by Dylan Carreiro and Michael Petrasso.

All four of those players were involved in Canada’s Men’s U-20 Team that reached the quarterfinals at the 2013 CONCACAF U-20 Championship in February.

Stanese ‘beyond excited’ at MNT call-up

For Stanese, his first experience with the senior team has been memorable as he’s had the chance to train with players he admired when he was younger.

“It was pretty cool,” Stanese said with a wide grin. “I really like Julian de Guzman. I watched him a lot when I was younger and I couldn’t wait to just talk to him, get stories out of him and just hear from his experience.”

It’s been something of a whirlwind year for Stanese, who’s made the move from Canada to playing in Germany. Picking up a first senior cap for Canada on Tuesday night would top everything nicely.

“I don’t even know what to say. If that happened it would be unbelievable. I’m just happy I’m here and if that happens we’ll see from there.”