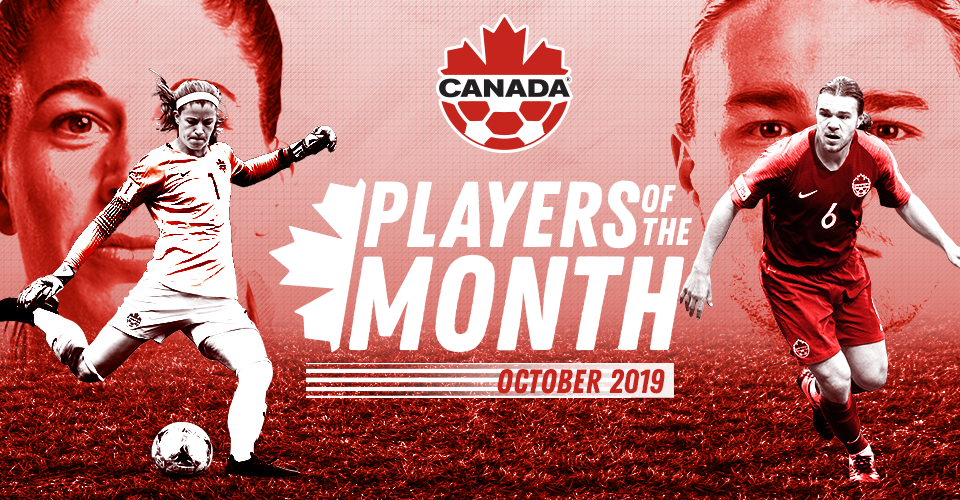 Stephanie Labbé and Samuel Piette have been named Canada Soccer’s Players of the Month for October 2019. Goalkeeper Labbé helped NC Courage capture the 2019 National Women’s Soccer League (NWSL) Championship while midfielder Piette kept Canada perfect with a massive 2:0 victory over USA in Concacaf Nations League. The 15 October home victory was the Men’s National Team’s first over USA at the international “A” level in 34 years.

Labbé became the second Canadian to win the NWSL Shield and NWSL Championship in the same season. After helping her club win the regular-season title by five points, Labbé and teammates knocked off the Seattle Reign and Chicago Red Stars in back-to-back weekends to capture the 2019 NWSL Championship. In the 26 October final in front of a sold-out home crowd, Labbé posted the clean sheet as NC Courage won 4:0 over the visiting Red Stars.

Upcoming in November, Labbé will be part of Canada’s squad for a four nations competition in China PR (7 November against Brazil and 10 November against either New Zealand or host China PR).

Piette, who led his hometown Montréal Impact to the 2019 Canadian Championship, was at the heart of Canada’s midfield in a historic 2:0 victory over USA in Concacaf Nations League. In front of an electric crowd at BMO Field, Piette led Canada with 46 passes and two steals and earned Player of the Match honours for his performance in the home victory.

Canada will next face USA on Friday 15 November in their last group match of 2019-20 Concacaf Nations League A. Canada lead the group with nine points perfect from three matches.

Also of note in the month of October, Kadeisha Buchanan (Olympique Lyonnais), Jordyn Huitema and Ashley Lawrence (both of Paris Saint-Germain) advanced to the Quarter-finals in UEFA Women’s Champions League. Buchanan and Huitema (twice) scored in the second legs of the Round of 16. In Major League Soccer (MLS), Jonathan Osorio and Richie Laryea both featured in Toronto FC’s 2019 Eastern Conference Championship victory on 30 October, sending the club back to the MLS Cup for the third time in four seasons.