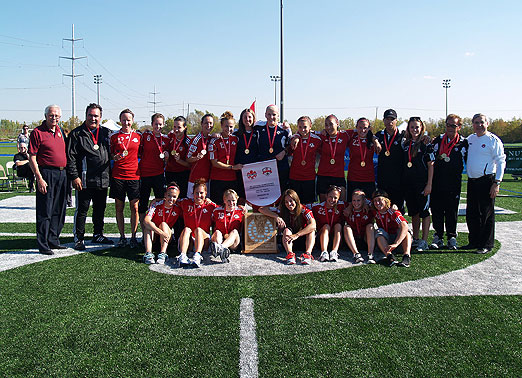 Surrey United named Sport BC Team of the Year

Surrey United won the Jubilee Trophy as national champions in 2011.

Jubilee Trophy champion Surrey United has been recognized as the 2011 Sport BC Team of the Year. The national champions were honoured on Thursday 8 March at the 46th annual Athlete of the Year awards. The event took place at the River Rock Show Theatre in Richmond, BC.

According to Sport BC, athletes, coaches and officials from across the province were recognized with awards from 17 distinct categories, celebrating the recipients’ achievements over the past year and their dedication to sport.

“This year’s finalists represent 13 BC communities and 19 different sports,” said Sport BC’s Sponsorship and Event Manager, Carey Summerfelt. “The strength of BC’s sport sector was on display tonight as we recognized the outstanding athletic achievements of our finalists.”

Said Jeff Clarke, Surrey United’s Technical Director and Head coach, “2011 was truly was an amazing year put together by an amazing group of players. To say they are a special group would be an understatement and their achievements have resonated with all of the great members at Surrey United Soccer Club”.

Surrey United’s starting XI for the 2011 final featured Theresa Nuttal in goal, Chelsey Hannesson at left back, Ari Adams and Nicole Stewart at centre back, Bianca Wilkinson at right back, April Coffin, Randee Hermus, Kate Qually and Rachael Pelat in the midfield, and Alexandra Benes and Katie Thorlakson up front.