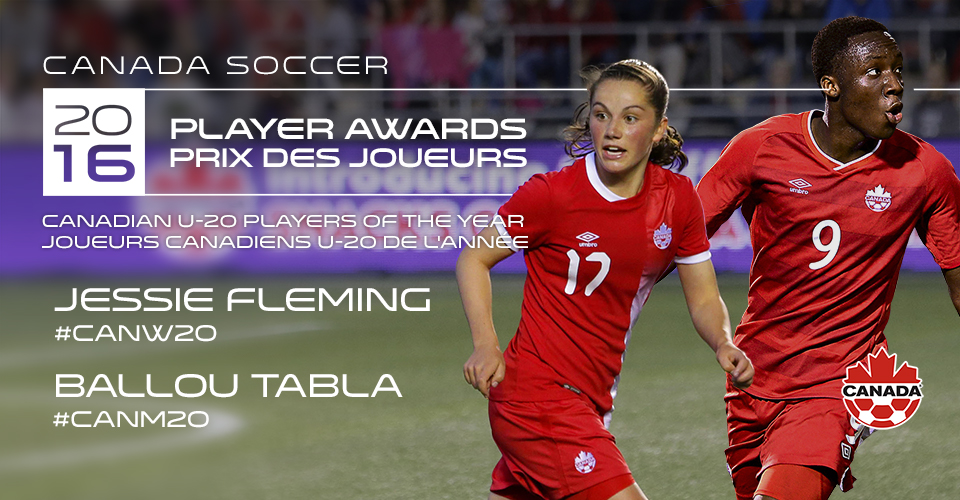 Ballou Tabla and Jessie Fleming have been named 2016 Canadian U-20 Players of the Year. Canada’s two footballers won the honour from a vote shared by national team coaches (50%) as well as Canadian clubs and coaches (50%). Tabla of Montréal, QC plays for Impact Montréal FC while Fleming of London, ON plays for UCLA.

Tabla is a member of Canada’s national youth program as well as Impact Montréal FC. In 2016, he signed a professional contract with the club in October as a homegrown player. Two months ahead of that contract, he starred in an exhibition match with the big club against AS Roma at Stade Saputo.

At the youth level, Tabla scored one goal and one assist in five international matches, including wins against England and Honduras as part of the Men’s National U-20 Team. With FC Montréal, he scored five goals and five assists in 21 matches.

“Ballou Tabla is a great and talented young man,” said Tony Fonseca, Canada Soccer’s Technical Director. “Montréal’s recent signing of him to a pro contract is a testimony of Ballou’s footballing qualities. No doubt in my mind that Ballou will continue to grow and showcase his talent.”

Fleming won an Olympic bronze medal in 2016 and was the only Canadian to start in all six matches at Rio 2016. In all, she scored two goals and one assist in 15 international matches, helping Canada post a record 15 wins over the course of the calendar year. She also won her first CONCACAF medal, a silver at the CONCACAF Women’s Olympic Qualifying Tournament.

At the college level, Fleming helped UCLA reach the elite eight in the NCAA competition, scoring 11 goals and five assists in 19 matches as a freshman. This marks the second year in a row that Fleming has been selected Canadian U-20 Player of the Year.

“I am certain that this award will continue to become one of only many for Jessie Fleming – as she is already a world class player and will only continue to get better and better,” said John Herdman, Canada Soccer’s Women’s National Team Head Coach. “All of Canda can look forward to seeing her continue to shine on the world stage over the next four years and beyond!”