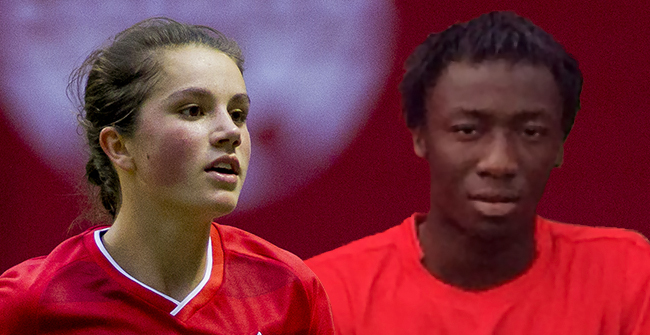 Tabla, Fleming named 2014 Canadian U-17 Players of the Year

The two players won the honour in a vote shared by national team coaches (50%) and Canadian clubs and coaches (50%).

Midfielders Jean-Yves Ballou Tabla and Jessie Fleming have been named Canadian U-17 Players of the Year for the 2014 season. The two players won the honour in a vote shared by national team coaches (50%) and Canadian clubs and coaches (50%).

“Tabla is a creative player. He is mature for his age, how he approaches the game. He is very dynamic. It is so obvious how much he loves his football by the way he trains and by how coachable he is,” said Sean Fleming, Head Coach of Canada’s Men’s U-17 Team. “He is a great teammate and has a great individual quality yet maintains it within a team concept.”

“The first thing that stands out to me is that Jessie is committed to be better. She was our captain and I think she led by example with her hard work and determination,” said Women’s U-17 Team Head Coach Bev Priestman. “She has fantastic talent but it’s not just her talent that’s shown her acceleration over the last eight months. It’s an unbelievable talent but it’s also a mindset and really high standards.”