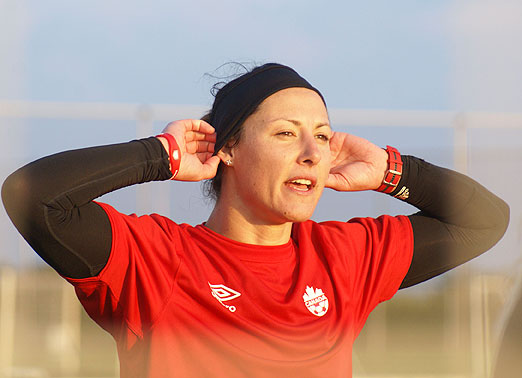 Melissa Tancredi has made her 75th career international appearance for Canada on Tuesday 6 March 2012. Tancredi was part of head coach John Herdman’s starting XI for the Canada-France final at the 2012 Cyprus Women’s Cup. Tancredi is the 16th player to reach the milestone.

Tancredi is now in her ninth season with the national team. A CONCACAF champion in 2010, she made her international “A” debut back on 26 February 2004 at age 22. Converted from defence to forward, she then scored her first international goal on 14 July 2007 at the Pan American Games. In all, she has scored an impressive 17 goals, currently ranked second amongst all active players.

In tournament play, Tancredi has represented Canada at two FIFA Women’s World Cups (China 2007 and Germany 2011), one Women’s Olympic Football Tournament (Beijing 2008), five CONCACAF championships (including gold in 2010), and one Pan American Games (bronze at Rio 2007). At China 2007, she scored the second-fastest goal in FIFA Women’s World Cup history (37 seconds from the start of the 20 September match against Australia).

Tancredi has been playing soccer since age four in her hometown of Ancaster, ON. A graduate of the University of Notre Dame, she played the most recent season with Piteå IF in Sweden.