Tesho Akindele said BC Place crowd was by far the best

“That was the best atmosphere I’ve seen in my career.”

Born in Calgary, Alberta, Tesho Akindele played soccer as a youngster in Canada and USA, but for the 24-year-old forward, soccer was soccer, wherever he played.

After living the first few years of his life in Canada, Akindele and his family settled in Colorado, where he starred at Northglenn High School. His high school career led him to college at the Colorado School of Mines, where he was a standout, becoming a four-time All-American and the school’s all-time leader with 76 goals scored. His exceptional college career gave him the idea that he might have what it takes to turn pro.

“After my first year in college, I scored a lot of goals and even though I was at a Division II school, I was an All-American and first team and I thought ‘man, maybe I can do this.’”

Although his college stats were stellar, Akindele didn’t believe he was a sure bet to be drafted into Major League Soccer.

“I didn’t think I was going to even get invited to the draft, I just thought maybe Colorado would give me a tryout. So I had no idea where or if I would get picked, which is the reason I didn’t even go to the draft, because if I didn’t get picked in the first two rounds I don’t want to be at the draft watching everyone else’s name get called, so I stayed home. That was nice, I was with my family, parents, girlfriend, college friends. Dallas called me right before they picked me and I couldn’t have been happier”.

On 16 January 2014, FC Dallas drafted the Canadian forward in the first round (sixth overall) of the MLS SuperDraft. He then made his debut for FC Dallas in a loss to Seattle Sounders FC three months later on 12 April 2014, which was a special moment for Akindele.

“My mom was in town for that game and that was the first time she had come to Dallas, so that was pretty cool and very special. It was all a blur. I was definitely nervous and just thought (to myself) keep running. Afterwards my mom and I got ice cream, we were pretty crazy, but it was special”.

In his first MLS season, Akindele scored seven goals, including a hat trick in San Jose, over 26 appearances in which led to being named 2014 MLS Rookie of the Year. His Canadian teammate Cyle Larin was named Rookie of the Year in 2015 and while the two Canadians may have a friendly competition as back-to-back winners, Akindele concedes that Larin likely has the upper hand.

“He (Larin) is kicking my butt in that competition, he’s scoring an outrageous amount of goals right now. He’s a fantastic player, every time I’m in camp with him for Canada or watching an Orlando game, he impresses me. For anyone who doesn’t know Cyle Larin yet, a lot of people are going to get to know him. I just try and keep up with him.”

After success in his MLS rookie season with FC Dallas, Akindele was invited and took part in a camp with USA. Ultimately, however, he decided to represent the country of his birth before he joined Canada’s run in 2018 FIFA World Cup Russia™ Qualifiers in June 2015.

“It was tough because I have big connections to both countries,” said Akindele “I have lot of relatives still in Canada and I used to go back every summer to live with my grandparents for a month, but I still have lots of friends and family here in the US, too. At the end of the day, I was a Canadian citizen since I was born and only became a US citizen a few years ago, so anytime I had imagined playing for a national team, it was always Canada. So now that I have that opportunity, I have to take it.”

“I talked to him a little bit before making my decision and he just seemed to have faith in me and really wanted me to come in. Plus he’s got all the credentials of a great coach and well respected around the world, so he definitely played a big part.”

Soon after his decision to suit up for Canada, Akindele made his debut for Canada on 11 June 2015 against Dominica, which was a dream come true moment.

“It was a great moment, my first international experience in FIFA World Cup Qualifiers, we got a win. There was so much good stuff going on that it was a dream kind of moment right there.”

“As a goal scorer, anytime you’re with a new team or a new situation, you try and get first one early. My uncle was at the game too and it was the first time he had seen me play, so that was exciting. It was just another good day and I’m glad I got it early because as a goal scorer, the more time goes by the more the pressure builds on you.”

Now 12 matches into his Canadian career and two matches away from a spot in the CONCACAF Hex, Les Rouges and Akindele are feeling confident about their chances to move on to the next round of 2018 FIFA World Cup Russia™ Qualifiers.

“It’s a great balance of new young talent as well as people that have been around for the last couple of times and that’s what you want in a team: young excited guys (and) willing to try new things and do anything (as well as) older guys that have been there, done that, and have the experience and are ready to give advice and guide us. Everyone can see improvement in our team and that we are moving in the right direction.”

After an away match against Honduras, Canada’s final match in September will be played at BC Place against El Salvador. It is a stadium that Akindele knows well both with Canada and FC Dallas, so he knows the atmosphere will be fantastic.

“The atmosphere is always great there, whether I’ve been there for Canada or FC Dallas, it has been incredible. The last time, we had over 50,000 fans against Mexico and that was just by far the best. Everyone was going nuts, Mexican and Canadian fans and that has been the best atmosphere I’ve seen in my career and if that’s (the atmosphere) we get to end this round of FIFA World Cup Qualifiers, then it’s going to be just amazing.” 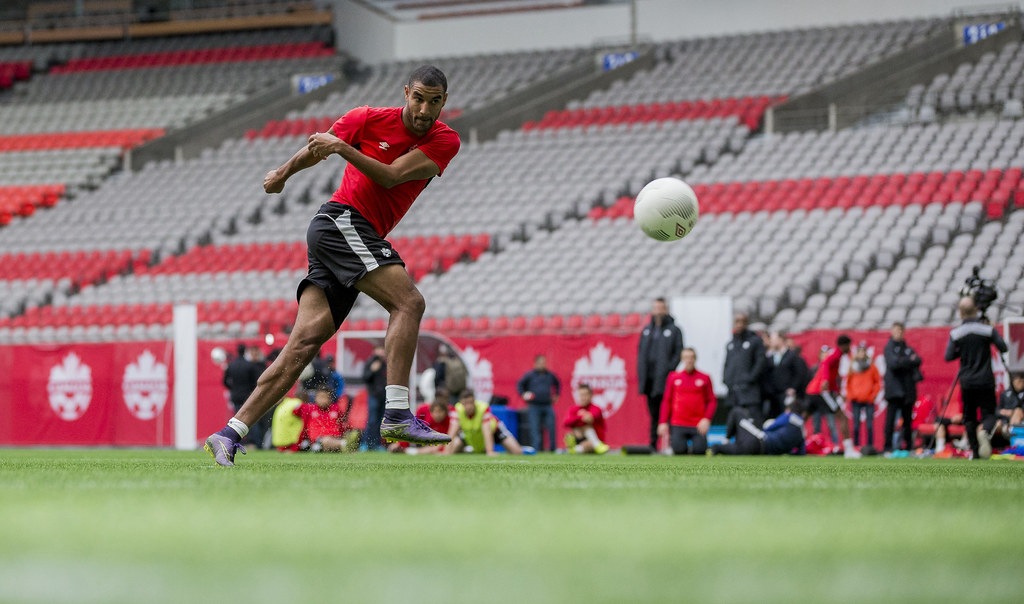