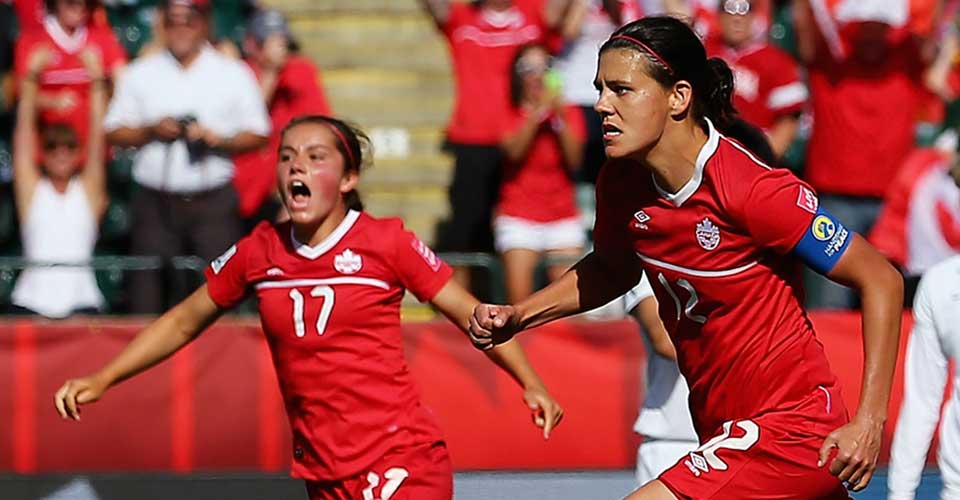 It has been an incredible decade of growth for the beautiful game in Canada, from winning a Concacaf Women’s Championship and reaching the podium in back-to-back […]

It has been an incredible decade of growth for the beautiful game in Canada, from winning a Concacaf Women’s Championship and reaching the podium in back-to-back Olympic Games to hosting the world’s biggest women’s sporting event, setting global and national attendance records, and securing the bid to co-host the 2026 FIFA World Cup. We’ve picked out 30 big moments from across the decade and shared them in chronological order, from our Concacaf women’s youth title in March 2010 to our historic Concacaf Nations League victory over USA in October 2019.

● Just two days after eliminating USA, Canada won the Concacaf Women’s Under-17 Championship with a 1:0 victory over Mexico on 20 March 2010. It was Canada’s third Concacaf women’s youth title.

● Héctor Vergara was appointed as an assistant referee to the FIFA World Cup™ for the third time. In the match for third place on 10 July 2010, he officiated his record 14th FIFA World Cup™ finals match.

Canada won their second Concacaf Women’s Championship with a 1:0 win over the tournament hosts Mexico. Canada won all five of their matches at the tournament, including a 4:0 win over Costa Rica to qualify for the FIFA Women’s World Cup for the fifth consecutive time. In the 8 November Concacaf final in front of 16,005 fans at the Estadio Quinatana Roo in Cancún, Karina LeBlanc posted her fifth-straight clean sheet and captain Christine Sinclair scored the winning goal on a penalty in the 54th minute.

● Canada participated in the FIFA Women’s World Cup for the fifth consecutive time in 2011, but finished last out of a ‘Group of Death’ that featured three confederation champions (Canada, Germany, Nigeria). Less than four months with new head coach John Herdman in charge, Canada won gold at the Pan American Games after beating Brazil 4-3 on kicks in the 27 October 2011 final.

● From 19-29 January, Canada hosted the record-setting 2012 Concacaf Women’s Olympic Qualifying Tournament in Vancouver, BC. The hosts qualified for the Olympic Games, won Concacaf silver, and set a tournament record with 162,223 cumulative spectators across 15 matches.

● During the Association’s centennial year, Canada Soccer implemented a revamped governance structure that took effect at the Annual Meeting of the Membres on 5 May 2012 in Ottawa, Ontario.

Canada captured the hearts and imagination of a country as they won 1:0 over France to win the bronze medal at the London 2012 Olympic Games. It marked the first time in 76 years that a Canadian team won a medal at the Summer Olympic Games. Captain Christine Sinclair scored a legendary hat trick in the incredible Canada-USA semi-finals, which drew a record average audience of 2.4 million television viewers on TSN. The country stopped, held its breath and cheered three days later when Canada won Olympic bronze, with Diana Matheson the goal-scoring hero in the final minute.

In 2019, Canada Soccer’s Women’s National Team from the London 2012 Olympic Games was honoured by the Canadian Olympic Hall of Fame in the Team Category as part of their Class of 2019 celebrations. READ MORE

● After her incredible 2012 international season, Canadian captain Christine Sinclair won both the Lou Marsh Trophy and Bobbie Rosenfeld Award as Canada’s best athlete of the year. The London 2012 Olympic flag bearer set a national record with 23 goals, including a world-best six at the Olympic Games.

● As part of a legacy to hosting the FIFA Women’s World Cup Canada 2015™, Canada Soccer partnered with Mexico and USA to help launch the National Women’s Soccer League. Sixteen Canadian footballers were allocated to NWSL teams for the inaugural 2013 season.

● From 5 to 24 August 2014, Canada hosted the seventh edition of the FIFA U-20 Women’s World Cup in Edmonton, Toronto, Montréal and Moncton. The Canada 2014 competition drew 288,558 cumulative spectators across 32 matches.

● From winning the 2014 Canadian Championship, the Montréal Impact made a historic run all the way to the 2014-15 Concacaf Champions League Final. The last match on 29 April 2015 drew 61,004 fans at Stade Olympique, Canada’s highest attendance for an in-stadia sporting event of the year.

It was a once-in-a-lifetime experience, with the world’s focus turned to our nation for the 30-day FIFA Women’s World Cup Canada 2015™ finals from 6 June to 5 July. Canada were terrific hosts, executing a flawless tournament, delivering a professional environment, and of course serving a warm, hearty welcome to the world’s beautiful game. The coast-to-coast competition drew a record-setting crowd of 1,353,506 cumulative spectators, generated nearly half a billion dollars in economic impact, and attracted a worldwide television audience of more than 750 million viewers.

For the first time ever, Canada hosted a competition from coast to coast across the country – from Vancouver on the Pacific coast to Moncton on the Atlantic coast. The competition also crossed five time zones, another first for a FIFA event. READ MORE

● Canada Soccer launched the Futsal Canadian Championship with an inaugural two-match series on 10 and 11 October 2015. The competition grew to an eight-club, 16-match championship within three years.

For the fourth time in less than a year, Canada Soccer set the national record for largest in-stadia attendance to a national team event of any sport in Canada. Before 2015, Canada Soccer’s 1994 Men’s International Friendly at Commonwealth Stadium held the record with 51,936 fans. Then within the stroke of a month, Canada Soccer’s Women’s National Team broke the record three times: 53,058 for the FIFA Women’s World Cup Canada 2015™ opener on 6 June (Commonwealth Stadium), 53,855 for the Round of 16 match on 21 June (BC Place in Vancouver), and 54,027 for the Quarter-finals match on 27 June (BC Place). Finally on Friday 25 March 2016, the record was set one more time: Canada Soccer drew 54,798 fans for a FIFA World Cup™ Qualifiers match at BC Place in Vancouver.

Canada Soccer’s Women’s National Team became the first Canadian team in more than a century to capture back-to-back medals at the Summer Olympic Games. Canada won five of their six matches, notably winning their group for the second major tournament in a row after a 2:1 win over Germany. On 19 August 2016, Canada won bronze after a 2:1 victory over the hosts Brazil at Corinthians Arena in São Paulo. Strikers Janine Beckie and Christine Sinclair co-led Canada with three goals each, with the Canadian captain Sinclair scoring the medal-winning goal on the final day.

● Carol Anne Chénard was appointed referee for the the gold medal final at the Rio 2016 Women’s Olympic Football Tournament on 19 August. Across the decade, Chénard worked as a referee at two Olympic Games and two FIFA Women’s World Cups.

● After leading Canada to back-to-back Olympic medals, John Herdman became the first soccer coach to win the Jack Donohue Coach of the Year Award by the Coaching Association of Canada.

● A back-to-back champion with Beşiktaş JK, Atiba Hutchinson helped his Turkish club qualify for the Round of 16 of 2017-18 UEFA Champions League. The six-time Canadian Player of the Year wore the captain’s armband for UCL matches in October and November 2017.

The United Bid of Canada, Mexico, and the United States was selected to host the 2026 FIFA World Cup™ at the 68th FIFA Congress in Moscow, Russia on 13 June 2018. It was a watershed moment for the sport in Canada, with an eight-year runway for Canada Soccer to forever change the landscape for the sport in the country. At the FIFA Congress, it was the first time in history that FIFA’s Member Associations were given the opportunity to vote on the host for the FIFA World Cup™. It also marked the first time that three nations were selected to co-host the world’s biggest tournament. The United Bid offered FIFA and its 2011 Member Associations unity, certainty, and opportunity as they prepare to host the largest FIFA World Cup™ in history, which will be expanded to a 48-team format.

● On 25 July 2018, former Canadian national youth team star Alphonso Davies moved from Vancouver Whitecaps FC to FC Bayern Munich in an MLS-record transfer deal. Within 18 months, the 2018 Canadian Player of the Year became a regular starter for the German giants.

● Canadian Para Soccer star Samuel Charron was named Player of the Tournament at the 16-nation IFPFC World Cup in Spain. The 21-year old Charron scored six times at the tournament, including a hat trick against Thailand.

● On a historic night at BMO Field in Toronto, Canada Soccer’s Men’s National Team beat rivals USA in an international “A” match for the first time in 34 years. The 15 October 2019 Concacaf Nations League victory was also Canada’s first against the Americans in an official competitive match since 1 November 1980.

Christine Sinclair was named the Canada Soccer Player of the Decade after an unparalleled 10 years of world-class performances in which she continued to build a legacy as of one of Canada’s greatest athletes of all time. A Concacaf champion in 2010 and back-to-back Olympic medal winner from London 2012 and Rio 2016, she was the 2012 Lou Marsh Trophy and Bobbie Rosenfeld Award winner, the 2011 WPS Championship MVP, and seven-time Canada Soccer Canadian Player of the Year.