Desiree Scott has always been quick on her feet. Her pace combined with her control and strength on the ball has served her well as a footballer.

Desiree Scott has always been quick on her feet. Her pace combined with her control and strength on the ball has served her well as a footballer.

So when it was announced that new Canadian national head coach Carolina Morace was about to watch her play from the stands, Scott had but a moment to decide how she was going to react.

It was right before the whistle blew that the announcement was made, said Scott. My mouth kind of just dropped. I was like, now I have to step up my game to a whole new level because I have to impress this coach.’

Scott had been in the national program before at the youth level. She started in 2003 at the U-16 level and played her way up until 2006 when she represented Canada at the FIFA U-20 World Cup in Russia. After that tournament, however, her national team dream was over.

Enter coach Morace and assistant Andrea Neil at the 2009 National Championships Jubilee Trophy competition. Scott was suited up for her summer club Winnipeg South End United, the Manitoba representative at the annual open amateur championship in Canada. Morace and Neil had been in Alberta at the start of the week watching the U-18 championship, but then decided to drive to Saskatoon to watch the senior competition.

It was kind of a wake up call for me, said Scott. I wanted to win the game, but now I wanted to look good for Carolina, too.

Scott looked good and the coaches were soon in contact via email inviting her to a national camp. The camp was scheduled for November, right on top of the University of Manitoba’s playoff season in women’s soccer. Scott decided to forego the playoffs and take the ticket to Sunrise, FL.

I had thought my national team years were over after the U-20s, said Scott. Then Carolina appeared out of nowhere at the club Nationals.

While Morace and staff scouted a number of different players in 2009, not all of them stuck to the program. Scott was determined, though, not to fail.

I was behind as a player, said Scott. I wasn’t fit, I wasn’t even in the mind set of a national team player. Every day, I was like, ‘I don’t know if I can do this, there is so much pressure.’

I am happy that I stuck it out.

Scott made her national A debut on 24 February 2010, a 2:1 victory over Switzerland. By year’s end, she had made 10 appearances in all, including seven from the bench. In November, she helped Canada win the 2010 CONCACAF Women’s World Cup Qualifier, Canada’s first confederation title since 1998.

I would have to say that final game in Mexico (has been the highlight), said Scott, with special reference to the Mexican crowd. That whole feeling was probably the craziest for me so far. I think the FIFA Women’s World Cup will be the next biggest thing.

There are not a lot of players that come from (Manitoba), so people are saying Go Des’ and you’re our hometown hero’, said Scott. I don’t want to let them down.

Scott isn’t about to let anyone down. She’s been given a second chance and she is sure to make the most of it. 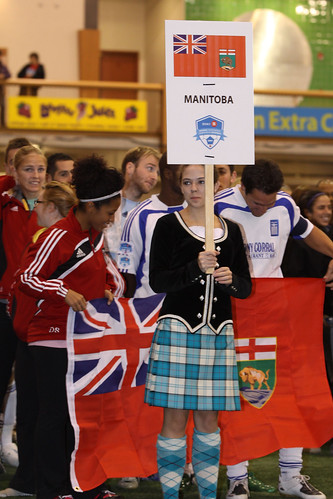 Desiree Scott grew up in Winnipeg and participated in the National Training Centre program from an early age. She represented Manitoba at the 2005 Canada Games before attending the University of Manitoba and representing club teams at the Jubilee Trophy competition.

From the 2009 competition in Saskatoon, SK, Scott and Winnipeg teammate Caley Miskimmin both landed tryouts with the national “A” team. Teenaged defender Alison Clarke, meanwhile, would soon be called into the U-17 national program.

“I think the prairies get overlooked a little bit,” said Scott. “Our training conditions are not always perfect, you can’t train all year round, and we have -40 weather in Winnipeg. So, it is not always fun to train, but you got to do what you’ve got to do.”