Emily Zurrer doesn’t mind taking one for the team. She has taken a few already. Just last November, she took a few stitches near her temple after she connected with an opponent rather than the ball in the air during the 2010 CONCACAF Women’s World Cup Qualifier.

Emily Zurrer doesn’t mind taking one for the team. She has taken a few already. Just last November, she took a few stitches near her temple after she connected with an opponent rather than the ball in the air during the 2010 CONCACAF Women’s World Cup Qualifier.

She just let the doctor stitch her up on the sideline, had her wound wrapped up and jersey changed (you can’t wear blood on your jersey in the field of play), and got on with the match.

Knock on wood, I have had no serious injuries so far, just the bleeding injuries, said Zurrer with a smile. If it is just bleeding, then I can play through things like that.

Now that is a true warrior.

Zurrer is one of the key figures on the Canadian defence. Just 23 years young, she is in her fourth full season with the national team. An Olympian in 2008, she will now make her FIFA Women’s World Cup debut in June in Germany.

Zurrer talked about her Olympic experience as one of her first great highlights as a national A player. After graduating from the Canadian U-20 team in 2006 (she participated in two FIFA U-20 Women’s World Cups), she spent two years away from the national program, concentrating on her school work while improving as a player at the University of Illinois.

Her quick re-entry to the national program might have come as somewhat of a surprise. While she always knew she would make the national team one day, it wasn’t in her mind that she would be there in 2008, especially with just months to go before the Beijing 2008 Olympics. After her graduation and return to Vancouver with an eye on the Whitecaps W-League program, she attended some national training session that took place in the same city.

After just one or two sessions with the big team, she was called in the evening at home and invited to go to Sydney to face Australia in a Women’s International Friendly match.

It was surreal, said Zurrer of that 12-week window in which she suddenly became an Olympian, albeit a lifelong dream. I wasn’t expecting to go to the Olympics in 2008 at all. One day I was training and then (one day) I was told I am going to the Olympic Games. I think I had to pinch myself through the whole experience.

Since her Olympic experience, Zurrer has had the opportunity to thrive under the tutelage of new head coach Carolina Morace and her staff. It has been one thing to learn coach Morace’s new system, but another to witness the results in international competition. Zurrer and Co. hopes that trend will continue into the upcoming FIFA Women’s World Cup in Germany.

Carolina just brings a whole new element to our game and to our style, said Zurrer. She has just added a lot of tools to our tool box that we didn’t have before.

One of the elements that the Canadian team hasn’t given up is its willingness to work hard and fight through every minute of every match. The combination of style and spirit has led to better results in 2010 and 2011, including the gold-medal victory at the 2010 CONCACAF Women’s World Cup Qualifier last November.

We have that fighting spirit, said Zurrer. It is something that we have always had. We are never ever going to give up.

As you can tell, a little knock or two isn’t going to keep Zurrer down. Now that is spoken like a true Canadian.

If you want blood (you’ve got it) 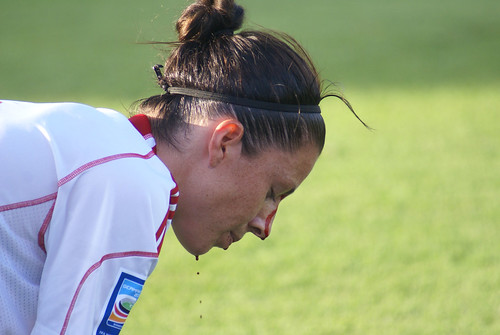 Zurrer’s knock in the 2010 CONCACAF Women’s World Cup Qualifier was just her most recent blood-drenching experience. There have been a few.

One of her biggest knocks was just before the FIFA U-20 Women’s World Cup Thailand 2004. Midway through a Women’s U-19 International Friendly match against Russia, doctor Cathy Campbell had to stitch her up on the “dirty locker room floor.”

“She had to do two layers because it was so deep,” said Zurrer. “You could see the bone. I wish they had taken a picture before they stitched me up. She did a layer underneath and a layer over top.”

Zurrer had to miss the first two matches of the FIFA U-20 Women’s World Cup because “the wound was so fresh,” but she was back in action with a protective head band after that.

One thing I can say is I am never afraid to shed any blood, sweat or tears, said Zurrer. I will hope (though) that I will not bleed (at Germany 2011) just because I don’t want it to hinder any time that I would be spending on the field.


Guidelines for the Return to Soccer