Stephanie Labbé had been working hard real hard. One of three goalkeepers on the Canadian team, she had been acknowledged as the new kid on the block only because of her age. When she joined the team at the national A level a few years back, she joined an established goalkeeping tandem that featured two of the world’s best in Karina LeBlanc and Erin McLeod.

Stephanie Labbé had been working hard real hard. One of three goalkeepers on the Canadian team, she had been acknowledged as the new kid on the block only because of her age. When she joined the team at the national A level a few years back, she joined an established goalkeeping tandem that featured two of the world’s best in Karina LeBlanc and Erin McLeod.

After three years of training together including the last two with a new goalkeeper coach, Labbé is far less the new kid and far more the third option to head coach Carolina Morace and her staff. What many consider the best goalkeeping duo in the world has quickly become the best goalkeeping trio.

I feel like in the past three years, I have really improved more than over the rest of my whole career, said Labbé, who credited goalkeeper Max Colucci for much of her success.

Just last year, Labbé earned her first four starts with the national team, stealing time from LeBlanc and McLeod. Her big breakthrough was in December at the Torneio Internacional in São Paulo, Brazil. When she got back-to-back starts including the championship final, she became the first goalkeeper not named LeBlanc or McLeod to play in back-to-back matches since Taryn Swiatek had done it in July 2004.

I knew going into that first match against Brazil that this was my chance to really show them (the coaches) what I could do, said Labbé. I just knew that I had to go out and do what I had been doing in training. I didn’t need to do anything spectacular, I just needed to do what I was doing in training.

Labbé was spectacular, holding the talent-heavy Brazil (including five-time FIFA World Player of the Year Marta) to a 0:0 draw.

To get that start in the final was really exciting, said Labbé. I remember when they pulled me aside and they said be ready (I thought) you’ve done it, you’ve shown them that you can be here, so now just go out and have fun and enjoy this opportunity.

Canada again played Brazil to a draw, this time to a 2:2 scoreline with only Marta (twice) getting the ball past Labbé. Canada was actually down a goal and down a player when captain Christine Sinclair scored the goal that drew the match even. The result coupled with the team’s greater goal difference in the tournament crowned Canada as champions in Brazil.

In 2011, Labbé has continued to improve under the tutelage of her coach and teammates, although her season nearly came off the tracks when she was hurt in a club match with Piteå in Sweden. She woke up the next morning unable to move it either way.

Labbé was genuinely worried, but she soon found out it was a PCL tear (posterior cruciate ligament) and not an injury more damaging like an ACL tear (anterior). No surgery would be required and she could work her way back into proper health.

So she worked hard, harder than perhaps she had ever worked before. Her work paid off and she was back in shape with eight weeks to spare before the opening match of the FIFA Women’s World Cup Germany 2011.

For me to get from (that point), a day when I could not even move my leg, to getting myself back to the national team level in five weeks was such an accomplishment.

Now, the only hard work rests in the decision that coach Morace will have to make: which of her three goalkeepers will she decide to play? 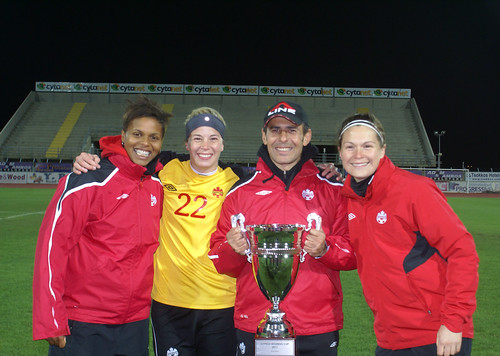 Colucci has been sure to work on the basic techniques with all three goalkeepers. After all, if you can’t do the simple things, then practicing the difficult things doesn’t matter.

Colucci also works on the mental side of the game, which is perhaps more important for goalkeepers than any other position players on the pitch.

“No matter what level you are, it is a mental position,” said Labbé. “You definitely have to have a different mentality from other players.”

Part of Labbé’s mental preparation is the knowledge the shares goalkeeper duties with two other terrific players.

“It is definitely quite difficult some days when you know you have two other great goalkeepers training beside you,” said Labbé. “You knw that whoever is picked to step up (between the three of us), she is going to do a great job.”