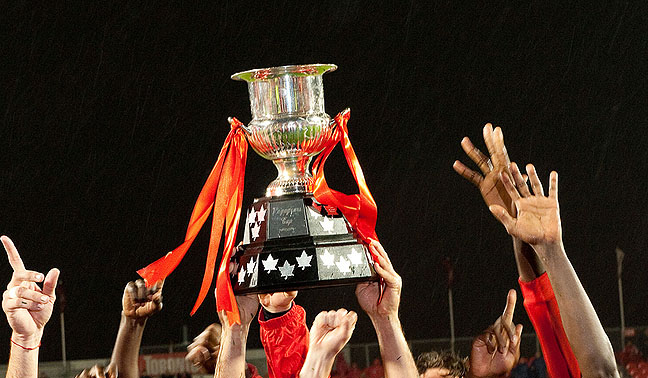 The road to and from Amway Canadian Championship 2012

From the Amway Canadian Championship to the FIFA Club World Cup

The Amway Canadian Championship is the Canadian Soccer Association’s annual professional club cup competition. The Championship winner is awarded the Voyageurs Cup and is registered as Canada’s representative in CONCACAF Champions League, the confederation championship which in turn qualifies one club for the FIFA Club World Cup.

The Championship itself is a knock-out competition, with four teams split into two semi-final series. Each semi-final winner advances to the final series. Every series is played over two matches, with each team hosting one leg at their home venue. The team with the most goals scored after two matches wins the series.

TIE-BREAKER RULES
If the two teams score the same number of goals over the two legs, the team which scores more away goals is determined as the winner. If this tie-breaker does not produce a winner, then both teams will play two 15-minute periods of extra time after the second leg. If, during extra time, both teams score the same number of goals, the away goals will count as double in favour of the visiting team. If no goals are scored during extra time, then kicks from the penalty mark (in accordance with FIFA Laws of the Game) will be used to determine the winner.

SEEDING THE TEAMS
At the moment, the four teams participating in the Amway Canadian Championship come from Major League Soccer (first division) and the North American Soccer League (second division). To determine the semi-final match-ups, teams are seeded based on standings in their respective leagues. As such, it will be the 2012 MLS and NASL standings that determine the seeding for the 2013 Amway Canadian Championship (three MLS teams followed by one NASL team). For the 2012 Championship, the seeding was based on the 2011 standings, with Toronto FC first (MLS), Vancouver Whitecaps FC second (MLS), FC Edmonton third (NASL) and Impact Montréal fourth (until last year, NASL).

Club rosters will feature a maximum of 30 players. As such, clubs that submit fewer than 30 players at the onset of the competition can then add new players until they have filled their 30 roster spots. A player must appear on the club roster to be eligible to compete in the Amway Canadian Championship. After featuring in a match with one club, a player may not appear for any other club for the duration of that season’s Amway Canadian Championship.