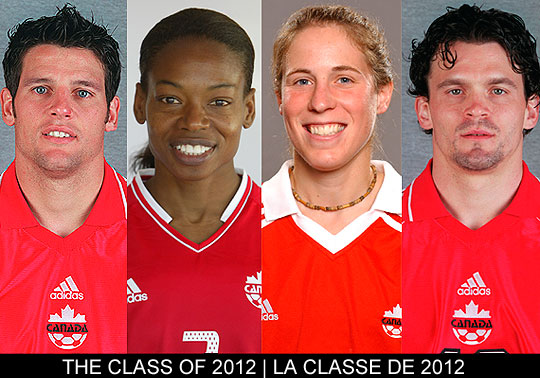 The Soccer Hall of Fame announces Class of 2012

Four players and two builders will become honoured members of The Soccer Hall of Fame this June 2012. Footballers Carlo Corazzin, Charmaine Hooper, Andrea Neil and Mark Watson as well as builders Gordon Arrowsmith (referee) and Angus Barrett have all been named to the 2012 Induction Class. The announcement was made this morning, 24 February, via The Soccer Hall of Fame & Museum’s official website, thesoccerhalloffame.ca.

Also to be recognized this summer are award winners John Richardson for the Pioneer Award, Canada’s 1989 Jeux de la Francophonie gold-medal team for the Team of Distinction, and British Columbia’s Victoria West for the Organization of Distinction. The Soccer Hall of Fame’s 2012 Induction Ceremonies will take place over the weekend of 2-3 June 2012, with details to be announced at a later date.

CONCACAF champion Carlo Corazzin spent 10 seasons on Canada’s national team, making 59 appearances at the international “A” level. The highlight was the 2000 CONCACAF Gold Cup title, in which Corazzin won the Top Scorer award with four goals in five matches. He scored big goals in both the quarter-final match against Mexico (a late equalizer before Canada scored again in extra time) and the championship final against Colombia.

At the international level, Corazzin represented Canada at one FIFA Confederations Cup, four cycles of FIFA World Cup Qualifiers, three CONCACAF Gold Cups, and one Jeux de la Francophonie (gold in 1989). From 1999 to 2001, he played in 22 consecutive Canada matches, the fourth-longest streak in national team history.

National teammate Mark Watson was also a CONCACAF champion in 2000, for him the highlight of a 13-year career with Canada’s national team. He made 78 appearances at the international “A” level, at the time of his retirement the second most in Association history. On 31 July 1993, Watson scored an important goal – the equaliser in an eventual 2:1 victory over Australia – in FIFA World Cup Qualifiers at Commonwealth Stadium in Edmonton.

As for Charmaine Hooper, she was not only a CONCACAF champion, but she was also a pioneer that participated in Canada’s first-ever women’s national team camp in July 1986 in Winnipeg, MB. At the time only 18 years old, she went on to establish a national record with 129 appearances at the international “A” level from 1986 to 2006. She was named Canadian Player of the Year three times, although it would have been more had the honour been awarded on an annual basis throughout her entire career.

At the international level, Hooper represented Canada at three FIFA Women’s World Cups (including a fourth-place finish at USA 2003), seven CONCACAF women’s competitions (including a gold medal in 1998), and one University Games. She was a tournament all-star at the FIFA Women’s World Cup USA 2003. When she left international football in 2006, she held the Canadian record with 71 career goals.

In 2007, it was Hooper’s long-time teammate Andrea Neil that established a new mark for international “A” appearances. That year, Neil became the first Canadian to participate in four FIFA Women’s World Cups, which included the fourth-place finish at USA 2003 four years earlier. Neil made her 132nd and final international appearance at the FIFA Women’s World Cup on 15 September 2007 in a 4:0 win over Ghana.

Along with her four trips to the FIFA Women’s World Cup, Neil also represented Canada at six CONCACAF women’s competitions, one Pan American Games (bronze in 1997), and one University Games. She scored 24 times, including a hat trick in a 3:0 win over Scotland at the 2002 Algarve Women’s Cup in Quarteira, Portugal. Just last year, the retired Neil became the first women’s footballer honoured by the Canadian Sports Hall of Fame.

As for the two builders, referee Gordon Arrowsmith was on the FIFA List of Referees & Assistant Referees for 10 years from 1982 to 1991. Builder Angus Barrett, meanwhile, was involved in soccer for more than 45 years, serving both at the provincial level for Newfoundland Labrador and at the national level with the Canadian Soccer Association.

This year’s Pioneer Award winner is John Richardson, a former secretary of the British Columbia Soccer Commission. He was also a council member with the Canadian Soccer Assocaition (then known as the Dominion of Canada Football Association.

This year’s Team of Distinction is the Canadian national team that won gold at the first Jeux de la Francophonie in Casablanca, Marocco in 1989. Canada posted three wins and one draw in that competition, including a 4:1 win over host Marocco in the championship final.