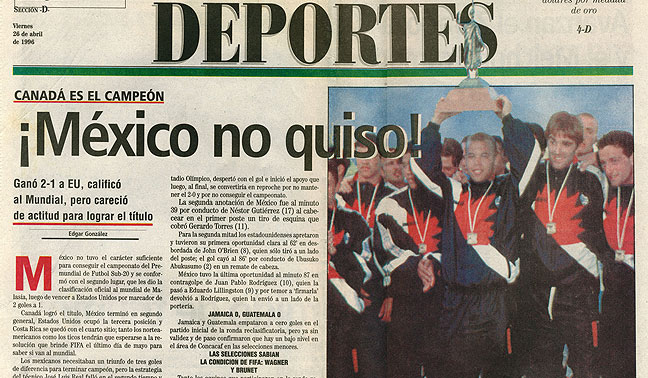 This Day in Football from 23-29 April

THIS DAY IN FOOTBALL: 23 April 1996
Canada qualifies for the FIFA U-20 World Cup Malaysia 1997. Canada wins 2:0 over USA in its final group match at the 1996 CONCACAF Men’s Under-20 Championship in Saltillo, Mexico. It marks the first time that Canada defeats USA at a CONCACAF Under-20 Championship. Two days later, a USA victory over Mexico will clinch the CONCACAF championship in Canada’s favour.

THIS DAY IN FOOTBALL: 24 April 2001
Canada falls 0:3 to Egypt in the LG Cup, the team’s first international match of the new season. Pat Onstad sets a new national record for goalkeepers by making his 11th consecutive appearance. Carlo Corazzin and Nick Dasovic become the 13th and 14th players to make their 50th appearances for Canada. It is the first time two players reach the milestone on the same day.

THIS DAY IN FOOTBALL: 24 April 2005
Canada falls 2:3 to Germany in an away Women’s International Friendly match in Hildesheim. Christine Sinclair scores her 50th international goal.

THIS DAY IN FOOTBALL: 25 April 1993
Canada falls 0:4 to Mexico in a FIFA World Cup Qualifiers match in front of 103,000 fans at Estadio Azteca in Ciudad Mexico. It marks Canada’s first match at Azteca Stadium since 16 November 1980. Randy Samuel becomes the fourth player to make his 50th appearance for Canada. Before the match, Mexico said it would dedicate its victory to comedian Mario Moreno “Cantinflas”, who lost his battle to cancer at age 82.

THIS DAY IN FOOTBALL: 25 April 1987
Canada qualifies for the X Pan American Games with a 1:0 victory over Bermuda at Ivor Wynne Stadium in Hamilton. Canada wins the away-and-home series 2-0 on total goals, with the first victory secured seven days earlier in Hamilton, Bermuda. Lucio Ianiero scores the winning goal less than a minute after the opening whistle (15 seconds after a pass from John Catliff). On the same day in Hamilton, the Canada Qualifying match is preceded by a Canada U-19 match that ends in a 1:1 draw with Chile.

THIS DAY IN FOOTBALL: 26 April 2003
Rhian Wilkinson makes her debut for Canada. The team falls 1:6 to USA in a rainy away Women’s International Friendly match at RFK Stadium in Washington, DC.

THIS DAY IN FOOTBALL: 27 April 1999
With Holger Osieck in charge for the first time, Canada walks away with a 1:1 draw with Northern Ireland in a Men’s International Friendly match. After Marc Bircham gives Canada the lead in the 67th minute, Paul McVeigh equalises for the hosts in time added in Belfast. While Mark Watson becomes the 11th player to make his 50th appearance, starter Jim Brennan and substitute Marc Bircham both make their debuts for Canada.

THIS DAY IN FOOTBALL: 27 April 2005
Canada wins 2:0 over France in an away Women’s International Friendly match in Strasbourg. Sophie Schmidt scores the opening goal, the first of her international “A” career. Substitute Andrea Neil scores a late goal to make it 2-0.

THIS DAY IN FOOTBALL: 28 April 1991
Canada falls 0:5 to USA in the inaugural CONCACAF Women’s Championship in Haiti. Canada wins silver, but fails to qualify for the inaugural FIFA Women’s World Cup. The final is played in front of 30,000 fans.