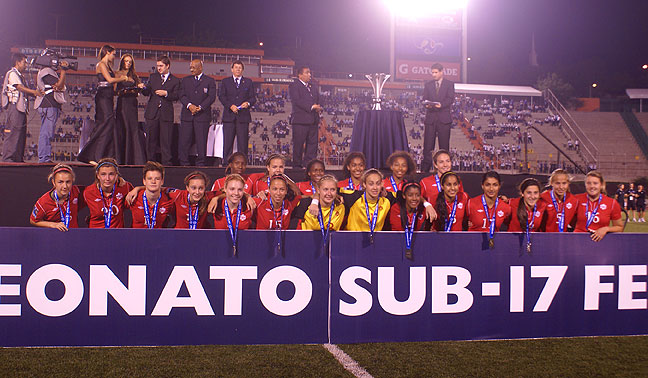 This Day in Football from 7-13 May

THIS DAY IN FOOTBALL: 8 May 1983
Canada wins 6:0 over Bermuda in an Olympic Qualifying match at Swangard Stadium in Burnaby, BC. Terry Felix (two), Dan Sudeyko, George Pakos, John Connor and Ed McNally score for Canada.

THIS DAY IN FOOTBALL: 8 May 1985
Canada wins 2:0 over Haiti to finish first in the CONCACAF semi-final Group 2 of 1986 FIFA World Cup Qualifiers. Dale Mitchell and Igor Vrablic both score for Canada in the victory at Stade Sylvio Cator in Port-au-Prince, Haiti. For teenager Vrablic, it is his fourth goal for Canada.

THIS DAY IN FOOTBALL: 10 May 1986
Canada wins 2:0 over Wales in a Men’s International Friendly match at Varsity Stadium in Toronto, ON. It marks the first time Canada defeats an European nation in an international “A” match.

THIS DAY IN FOOTBALL: 12 May 1996
Canada falls 0:6 to USA in an away Women’s International Friendly match at US Cup ‘96 in Worcester, MA. Geraldine Donnelly becomes the first player to make her 50th appearance for Canada.

THIS DAY IN FOOTBALL: 13 May 1990
Canada captures the Corona Three Nations Cup following a 2:1 victory over Mexico at Swangard Stadium in Burnaby, BC. John Catliff scores the opening goal before Luis Flores equalizes in the 65th minute on a penalty – roughly five minutes after Mexico is reduced to 10 men thanks to a Javier Aguirre expulsion. Catliff comes through with the game-winning goal in the 87th minute – his third goal in two matches. Of note in the match, Frank Yallop makes his international debut for Canada.