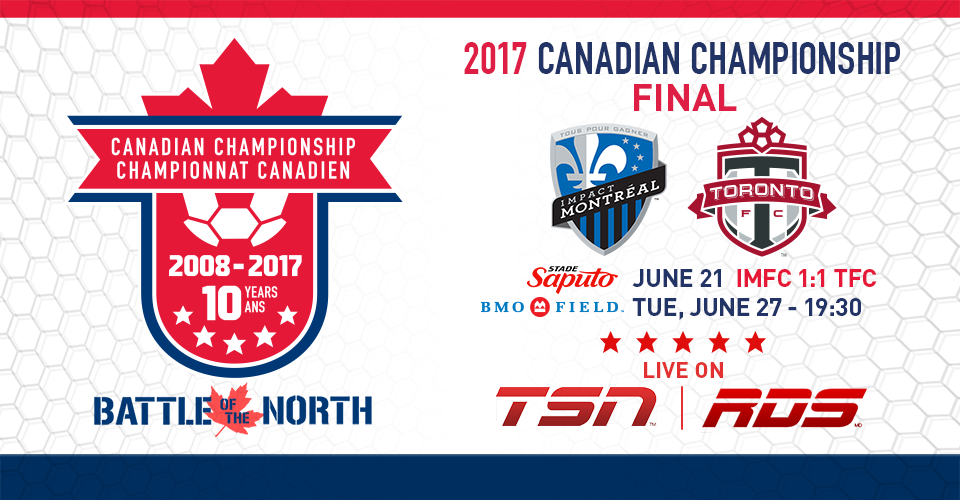 Toronto and Montréal all even in Canadian Championship final

It’s all going to come down to 90 minutes.

Canadian rivals Impact Montréal FC and Toronto FC are all even after 90 minutes in the 2017 Canadian Championship final after the two sides played to a 1:1 draw in the opening leg at Stade Saputo on Wednesday 21 June.  The return leg is next Tuesday 27 June at BMO Field in Toronto with a 19.30 local kick off. The match will be broadcast live across the country on TSN1, TSN3, TSN4, TSN5, and RDS (19.30 ET / 16.30 PT).

It marks the sixth time in seven years that the opening leg has ended in a draw.

Matteo Mancosu opened the scoring in the 19th minute on a header from close range. Laurent Ciman initiated the play with a long drive that Clint Irwin did well to save, but conceded a corner kick. On the corner that was played high to Marco Donadel, the long drive was initially stopped by Irwin, but the rebound was headed in by Mancosu.

Just 10 minutes later, Toronto FC equalised on a Jozy Altidore left-footed shot from the top of the box. With an Impact player down following a three-man collision, Raheem Edwards beat two other defenders to win the header in the air to move the ball to Altidore. The Toronto striker then took a touch with his right foot before he fired the equaliser with his left foot.

Edwards had actually nearly equalised the score two minutes earlier when he hit the post down the left wing in the 27th minute. Montréal then had a chance in the second half on a penalty, but Ignacio Piatti missed the attempt with a shot that sailed over the crossbar.

“The Battle of the North comes down to two teams that are familiar foes and true rivals,” said Steve Reed, Canada Soccer President. “We are expecting a real fight for Canadian bragging rights as well as a shot at international glory”

Tweets about #CanChamp AND from:@CanadaSoccerEN