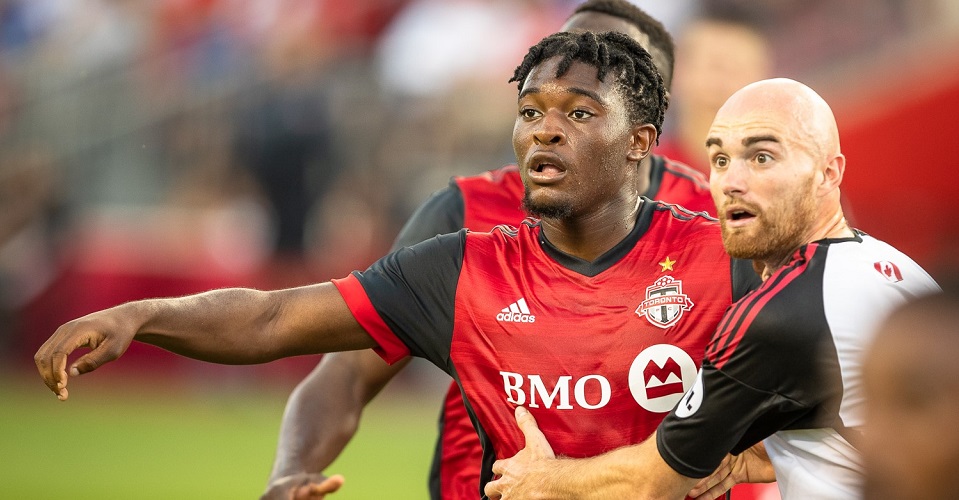 Toronto FC earned their spot in the 2018 Canadian Championship Final Round with a 3:0 (4:0 on aggregate) victory over Ottawa Fury FC at BMO Field. […]

Toronto FC earned their spot in the 2018 Canadian Championship Final Round with a 3:0 (4:0 on aggregate) victory over Ottawa Fury FC at BMO Field. Ayo Akinola, Jordan Hamilton, and Jonathan Osorio scored the goals for the home side. Toronto won the first leg of the Semi-Final Round 0:1 the previous week in Ottawa.

Akinola opened the scoring in the 35th minute after the initial free kick was played in by Liam Fraser to the back post. Ryan Telfer’s touch put the ball back across the front of the Fury net and Ottawa defender Jérémy Gagnon-Laparé cleared it off the line straight to Akinola who smashed the ball into the back of the net.

Ottawa Fury FC’s two best chances both came from Kevin Oliveria. Clint Irwin was forced to make a key save just minutes into the second half when Oliveira carried the ball towards the goal line and put a cross in that looked like it had a chance to cross the line, but Irwin reacted quickly and got a strong hand behind the ball. Later in the match, Oliveira nearly beat the Toronto FC keeper with a free kick that carried just over the crossbar.

The match opened up as time passed and Ottawa Fury FC pressed, needing to score two goals to have a chance to advance to the Final Round.

Hamilton doubled Toronto’s lead in the match in the 76th minute following a strong run from Ashtone Morgan who perfectly placed a low cross just out of the reach of Fury keeper Maxime Crépeau. Eight minutes later, Jonathan Osorio made it 3:0, cutting inside and hammering a shot past the legs of two Ottawa defenders to secure a spot in the Final Round for the two-time defending Canadian Champions.

In 2017, Toronto FC also edged out Ottawa Fury FC in the Semi-Final Round and went on to win the 2017 Canadian Championship, qualifying for the 2018 Concacaf Champions League and advancing to the Grand Final this past spring.