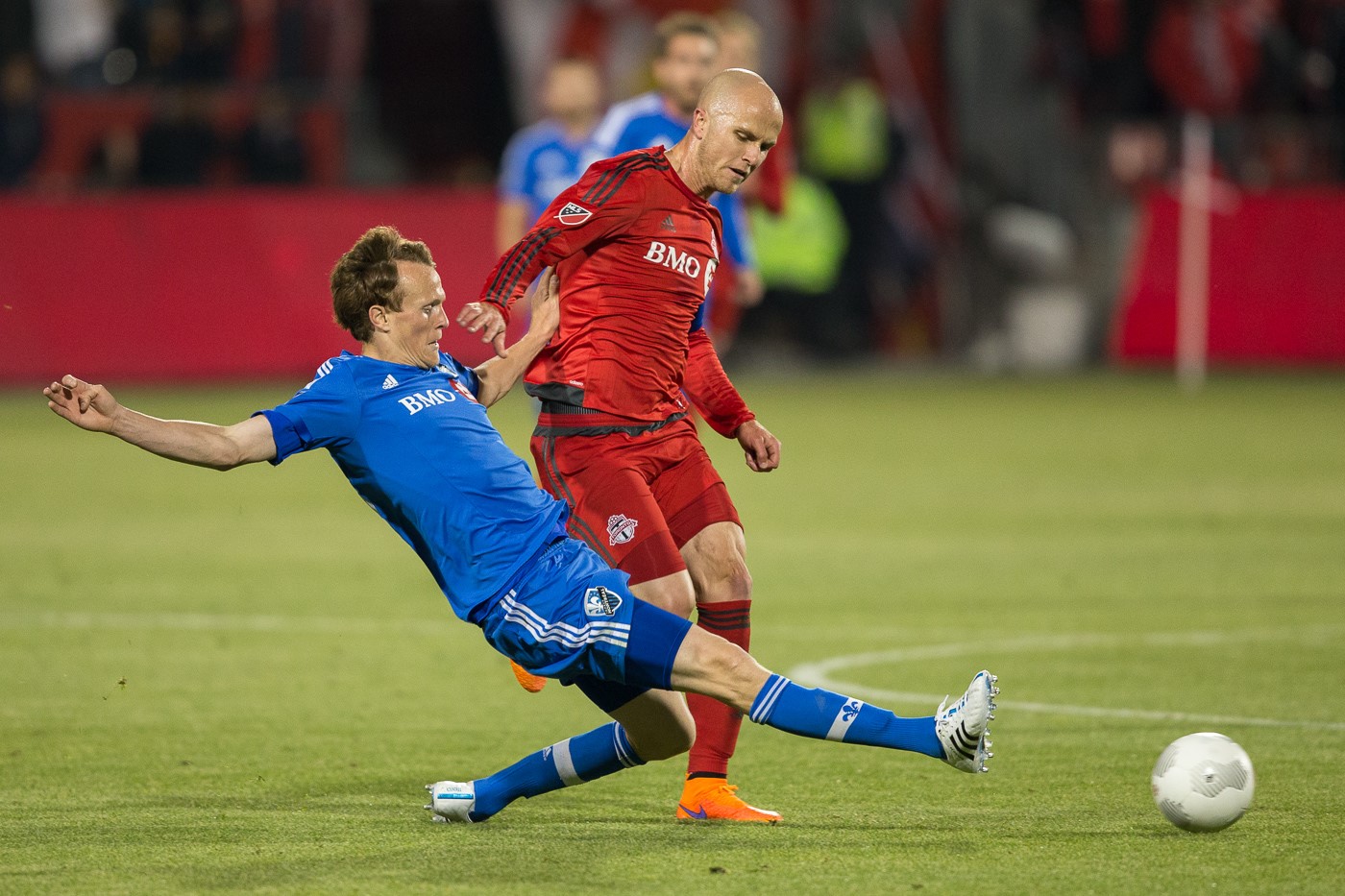 Toronto FC defeated the Montreal Impact 3:2 in the Amway Canadian Championship semifinal second leg on Wednesday, but lost the series in a game that featured plenty of goals and late drama courtesy of Dominic Oduro.

The Impact went into the tie with a 1-0 advantage from last week’s first leg, and despite Toronto taking a 3-1 lead in the second half courtesy of Jozy Altidore, Benoit Cheyrou and Sebastian Giovinco, the Reds couldn’t hold on to the result, allowing a late goal in by Oduro to eliminate the hosts from the Canadian Championship on away goals.

The game started off with plenty of energy from both teams, with Toronto controlling the flow of the match in the first 20 minutes. Impact forward Kenny Cooper, making his first start for the club, made his presence felt around the box, however, testing goalkeeper Chris Konopka early on.

It was a bit of combination play from Toronto FC’s two Designated Player forwards, however, that opened the scoring, Giovinco and Altidore exchanging quick tap passes before the Italian international slipped a through pass to his American counterpart. Altidore took the shot as he went down but beat Eric Kronberg, tying the aggregate score at 1-1 in the 22nd minute.

Three minutes later, Montreal struck back off a corner kick. Calum Mallace controlled the ball in the box, unmarked completely, and struck at goal. Cooper got a touch on the shot and redirected the ball slightly into the back of the net, giving Montreal a 2-1 aggregate lead and a crucial away goal. That would be Cooper’s entire contribution to the match, however; he went down with injury a few minutes later and was replaced by Jack McInerney.

The rest of the half winded down, with both sides creating a few moments of danger, but Montreal went into the locker rooms holding a lead, forcing Toronto FC to search for two more unanswered goals to win the tie.

In the second half, Toronto FC did just that.

Jonathan Osorio came close with a point-blank shot on Kronberg’s net, but the Montreal ‘keeper made a big save. Then, it was the Giovinco and Altidore show, with Montreal’s Maxim Tissot off on the sidelines dealing with a collision injury. In the 57th minute, Altidore picked up on an over-the-top pass by Bradley, and controlled well, before slipping a pass into the box for an onrushing Cheyrou. The French midfielder tapped home the effort with ease.

One minute later, Toronto FC’s three Designated Players combined again; Bradley picked up the ball in midfield, turned quickly, passed over to Altidore, who first-time passed over to Giovinco on his left. The Italian forward rounded his defender and went one-on-one with the ‘keeper, placing a finessed, curling shot past Kronberg to make it 3-1 for the game, 3-2 on aggregate.

But, in the 84th minute, that dream comeback turned sour, when former Toronto FC winger Oduro got on the end of a cross and headed past Konopka, tying the series at 3-3, with Montreal holding the away goal advantage.