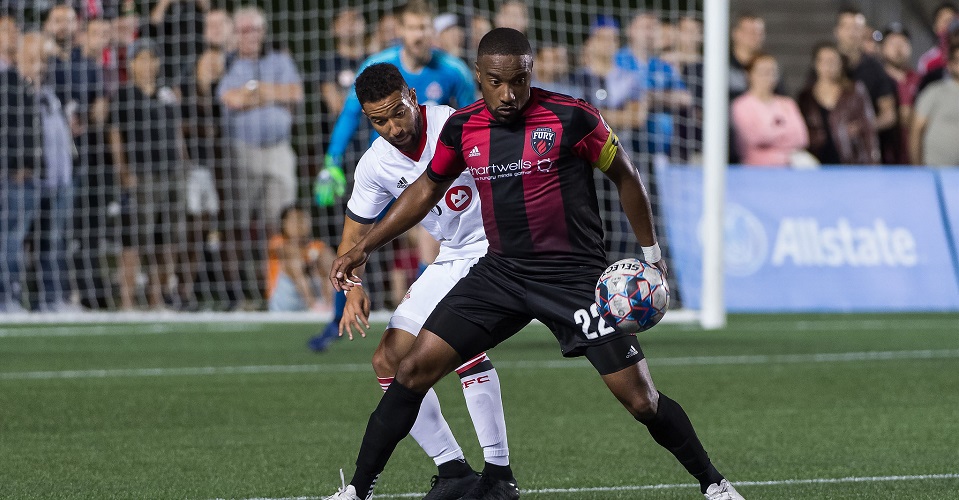 An early goal from Jonathan Osorio led Toronto FC to a 0:1 victory over Ottawa Fury FC in the first leg of the 2018 Canadian Championship […]

An early goal from Jonathan Osorio led Toronto FC to a 0:1 victory over Ottawa Fury FC in the first leg of the 2018 Canadian Championship Semi-Final in at TD Place in Ottawa, ON. The teams will travel to Toronto for the return leg on 25 July at BMO Field.

Osorio notched the crucial away goal for the defending champions in just the 5′ of the match, with a shot that beat Ottawa keeper Maxime Crèpeau at the near post. Ryan Telfer played an important role in the opportunity, working hard to keep the ball in play before he slotted a pass to Osorio at the top of the box.

Ayo Akinola had a great chance to double the lead for the visitors less than a minute into the second half but drove the shot into the side netting.

Kevin Oliveira’s free kicks provided some of Ottawa’s most threatening chances, including a cross that just missed both the head of Thomas Meilleur-Giguère and the far post late in the first half.

Ottawa’s best chance of the match came late in the 84′, when Onua Obasi’s cross found a wide-open Steevan Dos Santos, whose header was on target but couldn’t beat keeper Clint Irwin who was well positioned on the line to maintain the one-goal lead.

Ottawa Fury FC earned their spot in the Canadian Championship semi-final with a 2:0 victory on aggregate against AS Blainville, winning 1:0 both at home and on the road in the Second Qualifying Round. This is the second consecutive year that Ottawa Fury FC have faced Toronto FC in the Semi-Final.