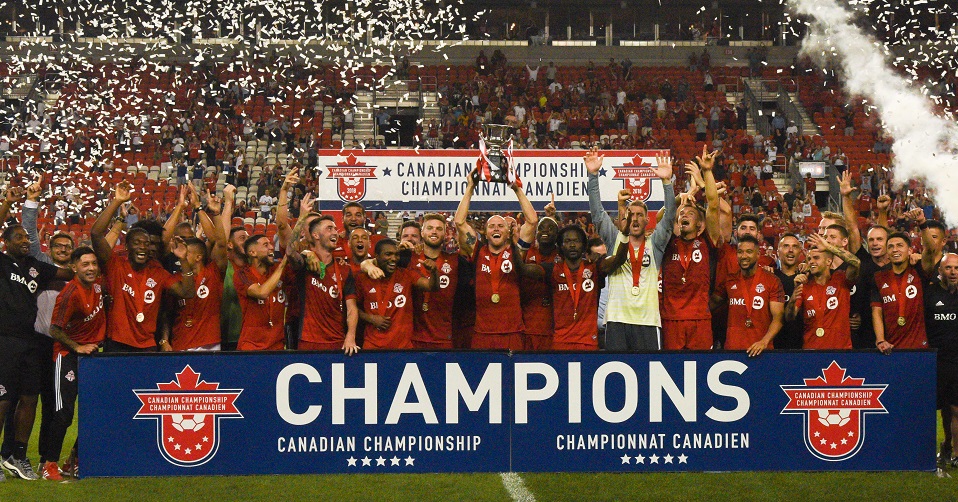 Toronto FC defeated Vancouver Whitecaps FC 5:2 in the second leg of the 2018 Canadian Championship Final Round on Aug 15 at BMO Field in Toronto, ON. With the 7:4 Final Round aggregate victory, Toronto FC earn a place in the 2019 Concacaf Champions League.

For the third time in a row, and seventh time in club history, Toronto FC lifts the Voyageurs Cup.#CanChamp pic.twitter.com/zffr6MgfxZ

“This was a big night for us because we wanted to get back to Champions League. We also wanted to win the Canadian Championship,” said Toronto FC Head Coach Greg Vanney. “The guys stepped up and played well. Congratulations to Vancouver they’re a good side.”

“As a Canadian it’s really important for me and for this club to participate in this competition every year, and to win three in a row means a lot.” said Canadian International Jonathan Osorio, “These are the kind of days that you need to take in and enjoy.”

Toronto FC went ahead with two quick goals just before halftime. Jozy Altidore scored in the 39’ minute after a combination play with Jonathan Osorio and Justin Morrow sprung him through and Altidore put it between Marinovic’s legs. Just five minutes later Sebastian Giovinco scored a diving header off Jonathan Osorio’s cross. Altidore was at it again early and often in the second half scoring in the 49’ off a Giovincio cross and in the 53’ he headed in a Giovinco corner. Kei Kamara slipped through on goal and pulled one back for Vancouver in the 63’ and Brek Shea added another at 77’, but, Canadian Tosaint Ricketts scored in the 80’ and Clint Irwin came up with a huge save late to end the Whitecaps comeback.

“It’s well documented that (Jonathan) is having a phenomenal season. Each year he’s worked his tail off to improve his game and to grow, and you can see that all of these things are coming together,” said Toronto FC Head Coach Greg Vanney. “He’s played a big part in all our matches this year. You can’t say enough about the year he’s having.”

The expanded 2018 Canadian Championship provided more opportunities than ever before for Canadian players. From 10 matches, there was a record 74 Canadian players across the six teams, more than twice as many that took part in last year’s Championship. The competition will grow substantially in 2019 with the addition of Canadian Premier League clubs.

Toronto FC earned a late 2:2 draw in the opening leg on August 8 at BC Place in Vancouver. The seven-time Canadian Champions will now return to Champions League play a year removed from falling in the 2018 Concacaf Champions League Final on penalty kicks.