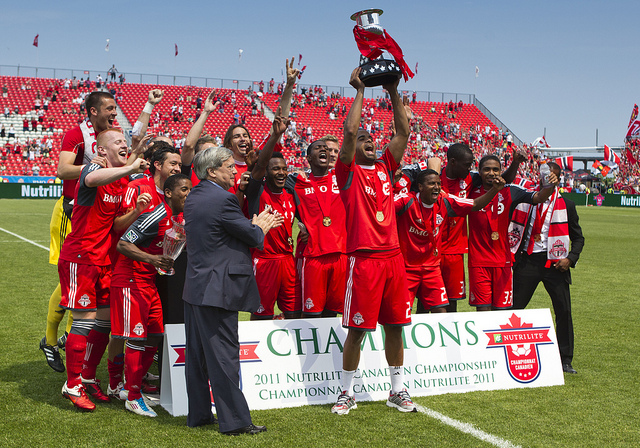 Toronto FC has won its third consecutive Voyageurs Cup after winning the 2011 Nutrilite Canadian Championship. Second half goals by Joao Plata and Mikael Yourassowsky overturned a first half deficit en route to a 2:1 victory on the day and a 3-2 series victory on aggregate against Vancouver Whitecaps FC. The win clinches Toronto FC a spot in 2011-12 CONCACAF Champions League.

Toronto FC has won its third consecutive Voyageurs Cup after winning the 2011 Nutrilite Canadian Championship. Second half goals by Joao Plata and Mikael Yourassowsky overturned a first half deficit en route to a 2:1 victory on the day and a 3-2 series victory on aggregate against Vancouver Whitecaps FC. The win clinches Toronto FC a spot in 2011-12 CONCACAF Champions League.

Both sides drew 1:1 in the opening leg back on 18 May in Vancouver, BC. The second leg was originally scheduled for 25 May, but had to be abandoned because of lightning and unplayable field conditions. With the second leg finally played on 2 July, Vancouver’s Camilo opened the scoring before Toronto struck back twice courtesy of Plata and Yourassowsky.

We deserved to win the game, said Toronto FC Head Coach Aron Winter. Even in the first half after we went down 1-0, I thought we reacted well. In the second half, we applied a lot of pressure up front and we were rewarded with the two goals.

The balance of play had been even in the early part of the first half before a moment of genius got Vancouver in front. In the 21st minute, Brazilian forward Camilo stepped up and curled a lovely free kick past Toronto FC goalkeeper Stefan Frei.

Toronto responded well and almost had an equaliser moments later. Vancouver captain Jay DeMerit had to backtrack to clear a Toronto shot off the line with goalkeeper Joe Cannon out of position.

The equalizer did come, but not until the second half. It came from the spot after a penalty was called by the referee. Joao Plata may have been fortunate not to have been called for a handball, but he was indeed taken down in the box by Vancouver’s Jonathan Leathers.

Whitecaps goalkeeper Joe Cannon saved the initial kick with a dive to his right, but he was ruled to have jumped off his line too early. Plata made no mistake on his second attempt, sending Cannon the wrong way with a low shot.

Toronto remained in the ascendancy and found a winner with just under half an hour left to play. This time, Plata turned provider as he sent a low cross to an unmarked Yourassowsky who simply had to tap to in for a 2-1 lead.

The Whitecaps pressed late with both Camilo and Eric Hassli getting shots on goal. Camilo had a low, left-footed shot stopped by Frei; then with just minutes remaining, Hassli let one go that flashed across the goalmouth and went harmlessly wide.

We still have a ways to go mentally to make sure we are stronger and (that we are) a better team, said Whitecaps FC head coach Tom Soehn. We got away from the tactics we had laid out today. We booted the ball up field instead of holding onto possession. I thought everything was a bit panicked.

Toronto coach Winter was forced to make one change in the first half due to an injury, replacing Santos in favour of Javier Martina (20th minute). He then made two more changes in the second half, replacing Harden with Tony Tchani (56′) and de Guzman with Doneil Henry (87′).

Vancouver coach Soehn made three changes in the second half, replacing Salinas with Russell Teibert (46′), DeMerit with Blake Wagner (62′) and Brovsky with Nizar Khalfan (73′).

Toronto FC will host Real Estelí in the opening leg of preliminary round of CONCACAF Champions League on 27 July. The return leg will be played in Nicaragua on 2 August.