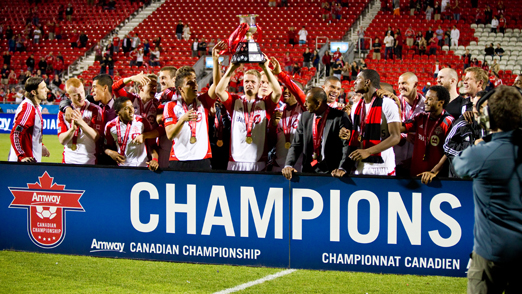 Toronto FC has won the 2012 Amway Canadian Championship following a 1:0 victory over Vancouver Whitecaps FC. Toronto won its fourth-straight Canadian title, this time winning 2-1 on aggregate with both a goal on the road and at home in the two-leg final.

Lambe scored the winning goal in the 84th minute from the top of the box. Substitute Nick Soolsma advanced the ball to Lambe who then fired it through a Vancouver defender’s legs for his second goal of the Championship.

After no goals were scored in the first half, both Toronto and Vancouver were reduced to 10 men after ejections to both teams in the 57th and 58th minutes. Toronto FC’s Julian de Guzman was shown a direct red card while Sébastien Le Toux was shown his second yellow card of the match, hence also a red card and ejection from the match.

Moments after Lambe’s goal, Vancouver’s Martín Bonjour had an opportunity with a free kick from just outside the box, but his kick was just high and over the crossbar.

In the second half after both teams had already been reduced to 10 men, coach Aron Winter replaced Avila with Richard Eckersley (60′), Plata with Nick Soolsma (78′), and goal-scorer Lambe with Terry Dunfield (84′).

In the second half, coach Martin Rennie replaced Rochat with Jordan Harvey (65′), Sanvezzo for Darren Mattocks (66′), and Thorrington for Chiumiento (73′).

The 2012 Amway Canadian Championship ran four consecutive Wednesday nights from 2-23 May. Now in its fifth season, the Championship featured Vancouver Whitecaps FC, FC Edmonton, Toronto FC and Impact Montréal. Previous champions were Toronto FC from 2009 to 2011 and Impact Montréal in 2008. Throughout the competition, fans have been able to follow the Amway Canadian Championship via live television broadcasts (Sportsnet and TVA Sports), an in-match Twitter stream @CanadaSoccerEN, and extensive post-match coverage via CanadaSoccer.com/championship, Facebook, Flickr.com/CanadaSoccer and youTube.com/CanadaSoccerTV.