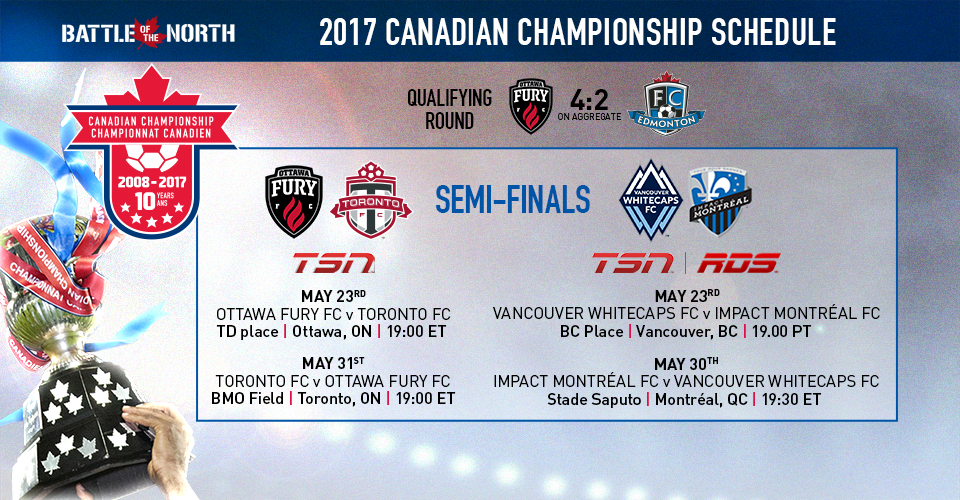 Canada Soccer and TSN have unveiled broadcast details for its exclusive live coverage of the 2017 CANADIAN CHAMPIONSHIP. The action kicks off with a semifinal doubleheader on Tuesday, 23 May as Ottawa Fury FC host Toronto FC at 7 p.m. ET on TSN, followed by Vancouver Whitecaps FC vs. Montreal Impact at 10 p.m. ET (see below for the full broadcast schedule).

Live streaming and on-demand viewing of the 2017 CANADIAN CHAMPIONSHIP is available to TSN subscribers via the TSN GO mobile app and on TSN.ca/Live. French-language coverage of the Vancouver Whitecaps FC vs. Montreal Impact semifinal series is available on RDS, and will include a 30-minute pre-game show.

“We are pleased to extend our partnership with TSN and RDS to bring the Battle of the North to fans from coast to coast to coast on television and digital platforms,” said Peter Montopoli, Canada Soccer General Secretary. “We’re calling this competition The Battle of the North because it really is the pinnacle of Canadian club soccer, and the only competition that gives Canadian professional clubs an opportunity to advance to the international stage, including the CONCACAF Champions League and FIFA Club World Cup. Fans can expect to see some world-class soccer in each of these upcoming Canadian Championship matches available on TSN and RDS.”

“We’re excited to once again partner with Canada Soccer to deliver exclusive coverage of the CANADIAN CHAMPIONSHIP, as teams compete to earn their spot in the 2018 CONCACAF CHAMPIONS LEAGUE,” said Shawn Redmond, Vice-President, Content Strategy and Business, TSN.

New Canadian Content rules introduced by Canada Soccer in 2017 will include the requirement that a minimum of three Canadians are in the starting lineup for all Canadian Championship matches which will result in more Canadian players taking the pitch than in any previous editions of the competition’s ten-year history.  The Canadian Content rule builds on the youth development initiatives announced last year, in collaboration with MLS, that include the expansion of the Homegrown Player parameters to ensure that Canadian youth players in MLS club academies or Canadian approved youth clubs will be considered as domestic players in MLS.

As the only all-Canada competition that leads to the international stage, including the CONCACAF Champions League and FIFA Club World Cup, not only will the 2017 Canadian Championship winner claim club soccer supremacy in Canada, but have the chance to carry Canada’s flag in international competition.


TSN’s Broadcast Schedule of the 2017 Canadian Championship is as follows:

*Schedule subject to change
** Final Leg #1 will be on Wednesday, June 21 should Montreal advance to the Final.