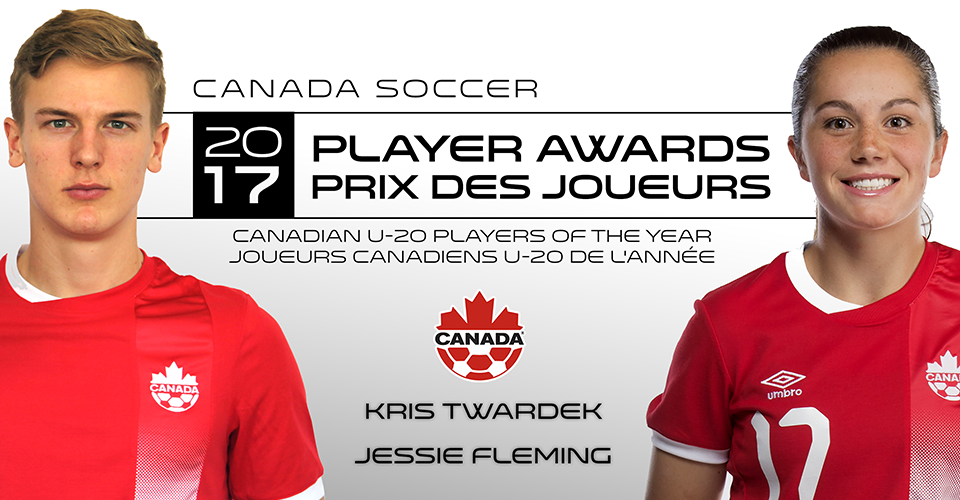 Kris Twardek and Jessie Fleming have been named Canadian U-20 Players of the Year after outstanding campaigns highlighted by Canada Soccer’s 2017 National Teams international season. […]

Kris Twardek and Jessie Fleming have been named Canadian U-20 Players of the Year after outstanding campaigns highlighted by Canada Soccer’s 2017 National Teams international season. Canada’s two young footballers won the honour from a vote by National Teams coaches as well as Canadian clubs and coaches.

At the international level, Jessie Fleming was a key midfielder with Canada Soccer’s Women’s National Team as she made 11 appearances and scored a goal and an assist. She also earned Player of the Match honours against USA in a 1:1 draw at BC Place in November. At the college level, she helped UCLA reach the NCAA College Cup final and she is a top-three finalist for M.A.C. Hermann Trophy honours (with the winner to be announced in January 2018).

“She has been building her identiy this year as one of the leading international midfielders,” said John Herdman, Head Coach of Canada Soccer’s Women’s National Team. “She has been doing that on the field with a goal against Costa Rica and a standout performance against USA where she really did set the standard for any midfielder when playing against arguably the best team in the world.”

At the international level, Kris Twardek represented Canada at the CONCACAF Men’s Under-20 Championship in February (one goal in two matches) and then made his international “A” debut against El Salvador in October. In England, he went on loan to Braintree Town where he made 12 appearances at the end of the 2016-17 season, then started the new season back at Millwall FC and made his Championship debut in a 0:0 draw against Hull City on 21 November.

“Kris is a player that has evolved quite a lot in the past year and you can tell we have in our hands a great player for Canada,” said Octavio Zambrano, Head Coach for Canada Soccer’s Men’s National Team. “He did not disappoint when he came into the Men’s National Team in October as everything we saw him do with his club he brought into our camp.”