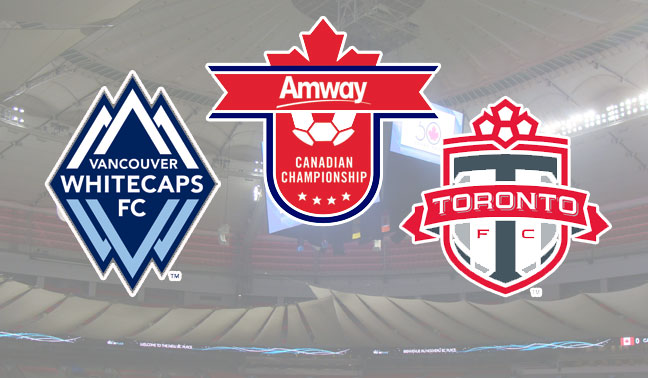 Vancouver to host Toronto in opening leg of Championship

Amway Canadian Championship final to kick off on Wednesday 16 May.

Vancouver Whitecaps FC will host Toronto FC in the opening leg of the 2012 Amway Canadian Championship final. For the second year in a row, the two sides will meet in Vancouver for the first of two legs, albeit this year the match will be played at the Whitecaps’ new home at BC Place. The opening leg will be played on Wednesday 16 May with a 19.00 local kick off (22.00 ET / 20.00 MT / 19.00 PT).

“We look forward to welcoming our fans to BC Place next Wednesday to take on Toronto FC in what should be a very entertaining first leg of the Amway Canadian Championship final,” said Whitecaps FC head coach Martin Rennie. “Our players are looking forward to a fantastic atmosphere to help push us one step closer to claiming the Voyageurs Cup title for the first time in club history.”

Vancouver Whitecaps FC advanced to the final by knocking off FC Edmonton in a two-leg semi-final series. Vancouver won 2:0 away on 2 May and 3:1 at home on 9 May. Vancouver’s all-time record in the Championship improves to seven wins, six draws and five losses. Whitecaps FC have finished second behind Toronto FC in each of the last three years.

Three-time defending champion Toronto FC advanced to the final by knocking off Impact Montréal in a two-leg semi-final series. Toronto drew 0:0 away on 2 May and then won 2:0 at home on 9 May. Toronto’s all-time record in the Championship improves to 10 wins, six draws and two losses.

The winner of the Amway Canadian Championship will qualify for the 2012-13 edition of CONCACAF Champions League. The CONCACAF champion then qualifies for the annual FIFA Club World Cup. Just last season, Canadian representative Toronto FC made it all the way to the semi-final stage of the 24-team continental championship.