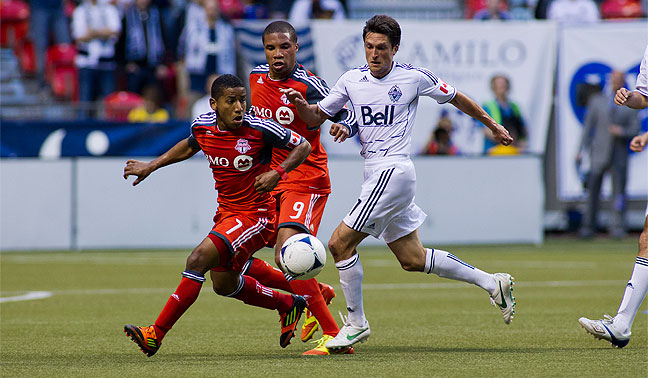 Vancouver, Toronto draw even in opening leg of Championship final

An added-time equaliser by Eric Hassli was the highlight of the opening leg of the 2012 Amway Canadian Championship final series. With the visitor Toronto FC up 1-0 after 90 minutes, home side Vancouver Whitecaps FC evened the score in the 91st minute to the delight of 14,878 fans at BC Place. The Hassli goal was a beauty, a well-timed bending volley after a picture-perfect cross from Alain Rochat.

“I just wanted to stay focused on goal and stay on my toes,” said goal-scoring hero Hassli.

Following the 1:1 draw in Vancouver, both teams will complete the two-leg series next Wednesday 23 May at BMO Field in Toronto. Ryan Johnson had scored the opening goal in the 66th minute before Hassli scored the equaliser in the 91st minute.

With both sides trading their share of opportunities, Vancouver created the best chance of the first half in the final minute as Sébastien Le Toux broke into the box down the right side. Le Toux’s quick shot was stopped by goalkeeper Milos Kočić and then cleared by the defence.

Midway through the second half, Toronto FC scored the opening goal on a Johnson header. With Toronto on the attack and the ball coming back to the top of the box, Julian de Guzman sent a perfect cross into the middle for a jumping Johnson.

With the 1-0 lead, Toronto continued to press forward in search of a second goal. Johnson nearly turned provider in the 85th minute after he sent a low cross to the feet of Nick Soolsma. As good as the cross, Joe Cannon’s save was better as he stopped Soolsma point blank from inside the box. Toronto FC did win a pair of ensuing corner kicks, but could not add to its lead.

Finally in the first of four minutes of added time, Hassli got the equaliser with his highlight-reel goal. Davide Chiumento played it to Rochat on the run who then crossed it to the awaiting Hassli.

In the second half, coach Martin Rennie’s three substitutions were Barbara off for Eric Hassli (56′), Watson off for Davide Chiumiento (69′), and Thorrington off for Darren Mattocks (86′).

In the second half, coach Aron Winter’s three substitutions were Avila off for Danny Koevermans (65′), Lambe off for Nick Soolsma (71′), and Plata off for Luis Silva (80′).

The second leg of the Championship final is set for 23 May 2012 at 20.00 ET / 17.00 PT. The match will be played at BMO Field in Toronto and broadcast live on Sportsnet. Fans can also follow the match live on Twitter at @CanadaSoccerEN, read the post-match coverage at canadasoccer.com/championship; find photos at flickr.com/canadasoccer; and watch video via CanadaSoccerTV.

The winner of the 2012 Amway Canadian Championship will not only lift the Voyageurs Cup, but will also clinch a spot in 2012-13 CONCACAF Champions League. The 24-team championship will feature teams from across North America, including four each from USA and Mexico, three from the Caribbean, three from El Salvador, two each from Costa Rica, Guatemala, Honduras and Panama, and one from Nicaragua. The winner of 2012-13 CONCACAF Champions League will qualify for the FIFA Club World Cup in December 2013.