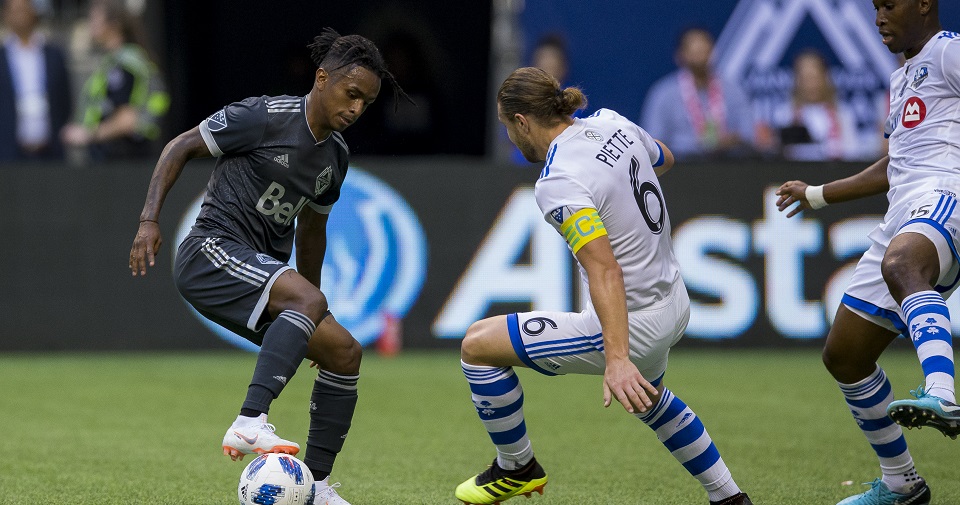 A penalty goal by striker Kei Kamara at the 60th minute led the Vancouver Whitecaps to a 2-0 victory over the Montreal Impact on Wednesday night, […]

A penalty goal by striker Kei Kamara at the 60th minute led the Vancouver Whitecaps to a 2-0 victory over the Montreal Impact on Wednesday night, in the return leg of their home-and-away semifinal matchup at BC Place in Vancouver, British Columbia.

This result enabled the Caps to win the two-game goal aggregate series 2-1 and move on to the Canadian Championship final for the third time in four years.

While Montreal had a few offensive moments, Vancouver dominated this game in almost every aspect of the game, including with 14 shots (five on goal) against six (three on goal) for Montreal.

The visitors had a real opportunity to score an all-important away goal in the 16th minute when midfielder Saphir Taider had the host defender back to their box with a run in the middle before he sent the ball on the right to Jeisson Vargas. The Montreal striker returned the ball in Taider’s run, leading to a quick, low and hard shot that Vancouver’s keeper Stefan Marinovic could only deflect close to the left post where Montreal’s Matteo Mancosu was one tap away from opening the score. Inexplicably, Mancosu froze, the ball passed through and the game remained scoreless.

The hosts made their opponent pay dearly three minutes later when Yordy Reyna found the back of the net on a strike right by the penalty spot that left no chance to Montreal keeper Clement Diop on the right side. The play started when Jakob Nerwinski won a duel on a high ball on the right flank before pushing the ballon along the line and centering in the box where Reyna took care of business.

At the 29th minute, Cristian Techera hit the crossbar on a free-kick on the top of Montreal’s box.

Techera knocked again on the visitors’ door before the break when he had a second chance on the net after the ball returned to him after missing a corner kick on the right. Techera sent a ball in heavy traffic in the box, but no one touched that ball that crossed the surface and missed the net to the left.

In the second half, Vancouver scored the winning goal at the 60th minute when the referee David Gantar pointed the dot following a foul against Canadian international Marcel de Jong in Montreal’s box. Kei Kamara sent a powerful shot on the penalty out of Diop’s reach on the right. It was 2-0 for Vancouver, with a 2-1 aggregate lead.

Entering the game in the 64th minute, Montreal’s striker Ignacio Piatti tested keeper Stefan Marinovic within a minute with a low hard shot, but the Caps’ keeper had the last word and hung on the ball.

The Whitecaps came close to add a third goal in the last 10 minutes, but Montreal keeper Clement Diop kept the door shut. He first made a stop on Techera’s stop in the 84th minute, following a second shot by substitute Anthony Blondell that shaved the goalposts in the top right corner.

Two minutes later, Techera served a perfect pass to Blondell across the box after coming in from the left side, but Diop found a way to move to his left and make an impossible save and steal the visitors of a two-goal lead.

For Vancouver, Stefan Marinovic started in goal behind Canadians Marcel de Jong and Doneil Henry along with Kendall Waston and Jakob Nerwinski , from left to right on the backline. Brek Shea was on the right wing, Christian Techera on the left with Aly Ghazal and Canadian Russell Teibert in the middle of the field. Yordy Reyna played behind Kei Kamara up top.

Efrain Juarez came on at the 76th minute to replace Ghazal. Three minutes later, Anthony Blondell took Kamara’s spot on the field, while Nicolas Mezquida joined in the action at the 88th minute, taking Techera’s spot.

The visitors made a double substitution at the 64th minute when Alejandro Silva and Ignacio Piatti ended Lovitz and Mancosu’s work night. Ken Krolicki was also brought in at the 85th minute, in Shome’s place.

With this result, the Vancouver Whitecaps will face the two-time defending champions Toronto FC in this year’s final, following the Reds’ 4-0 aggregate victory over the Ottawa Fury in the other semifinal. The home-and-away final series will be played on August 8 and 15 and the winner will represent Canada at the 2019 Scotiabank Concacaf Champions League.