Veteran de Guzman to be honoured on 25 March

Canadian record holder Julian de Guzman will be honoured before the upcoming Canada match at BC Place on Friday 25 March 2016. Canada Soccer will honour de Guzman for setting the all-time Canada record for appearances, having set the Men’s National Team record with his 85th international appearance in November. Fans are encouraged to find their seats before the 19.00 local kick off to equally congratulate de Guzman’s achievement.

Canada will face Mexico in 2018 FIFA World Cup Russia Qualifiers on 25 March at BC Place in Vancouver before traveling to Estadio Azteca a few days later. If Canada wants to progress to the “Hex” and make a statement to the rest of CONCACAF, these two games would be the ideal spot to do so and Canada’s most experienced player, captain Julian de Guzman, knows it.

“This game against Mexico is the most important game in our international careers and this is a chance to take a step forward and become that winning team at home,” said de Guzman. “It’s time to set a new trend and create a new face for the Canadian game and we want to make it a perpetual trend for this country.”

A captain with both the national squad and his professional club Ottawa Fury FC, de Guzman knows that he, along with other veteran players like Atiba Hutchinson, are there to not only lead and guide this young Canadian squad through FIFA World Cup Qualifiers, but to also teach, something he’s learned from the players before him.

“Raising the bar and setting the standard, guys like DeRo [Dwayne De Rosario], Tomasz Radzinski, Paul Stalteri have all set the bar,” said Guzman. “Atiba Hutchinson and myself now give something for the young guys to come in and look up to and then be better.”

“This is the best atmosphere I’ve seen and experienced at home. That vibe, it can only make things better for the future of the game.”

Currently holding the record for most appearances for the Canadian squad, the 34-year-old will likely be called into action against Mexico to earn yet another, and on his birthday – 25 March – nonetheless. Along with de Guzman’s veteran presence, the youth of Canada will be on display and Canada has some players with skill coming through the ranks.

“Today’s quality that I see coming in and getting a chance to play for the national team and starting their professional careers is improving,” said de Guzman. “We’ve been in a drought for a couple years now, but we’re finally getting the right pieces together now to build a team that could compete for the Hex and potentially for Russia.”

Canada will face one of the best teams in CONCACAF over their next two 2018 FIFA World Cup Russia Qualifiers and will largely be guided by how the squad plays both home at BC Place and away in Mexico. While de Guzman knows what the players need to do on the pitch, de Guzman also realizes the impact that the Canadian fans could have on the team and the match itself.

“The last game against Honduras, it was a special feeling, we feel alive and we feel like we have the right backing and it shows us the idea of something that could become very special and pushes us on.”

With over 40,000 fans expected to attend the 25 March match in Vancouver, the Canadian captain is excited about the growth of the fan base. 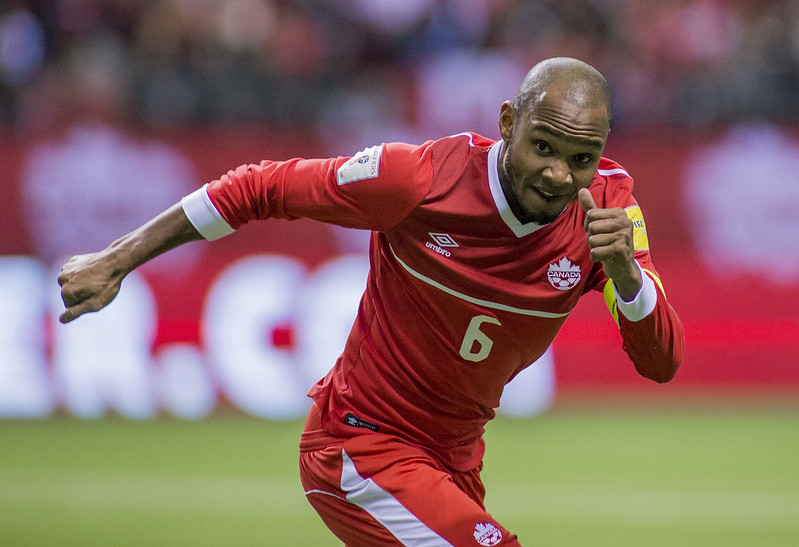 “The game in Vancouver was a record attendance and then hearing that against Mexico the crowd will be double, it was really nice. Going now into my fourth cycle of FIFA World Cup Qualifiers, this is the best atmosphere I’ve seen and experienced at home. That vibe, it can only make things better for the future of the game.”

Away from home has always been difficult for Canada and de Guzman says it’s some of the most difficult places he’s ever had to opportunity to play.

“Playing in CONCACAF has always been special and a different challenge and in my career it’s been one of the toughest places to compete in,” said de Guzman. “You’re not just dealing with quality players and strong countries, you’re also dealing with atmospheres that many don’t even hear about or even get to experience. We’re playing against teams that will die for this sport. We’re Canadian, we have everything already and I think that’s one of our problems that we’ve had for too long. We have to make this something (for which) we want to die; I think that will help our mentality going into these type of situations.”

With two matches against Mexico, de Guzman looks at this as an opportunity to announce Canada’s return.

“We want to make a statement to CONCACAF and the world that we are still around. This is a great moment to turn things around especially against a team like Mexico.”

Words by Tyler Green and picture gallery by Bob Frid.