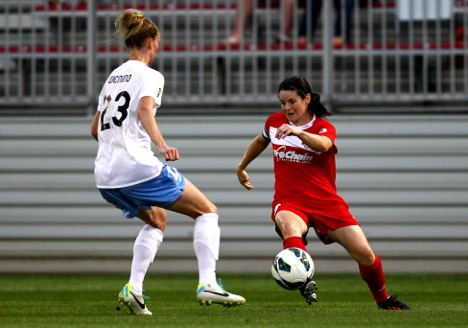 The Canadian international was voted the National Women’s Soccer League Player of the Week by the media for Week 18 of the 2013 NWSL season.

Washington Spirit midfielder and Canadian international Diana Matheson was voted the National Women’s Soccer League (NWSL) Player of the Week by the media for Week 18 of the 2013 NWSL season.

Matheson, 29, had a goal and an assist in two games as the Washington Spirit recorded a pair of 1:0 victories at Maryland SoccerPlex in Boyds, MD, over the Chicago Red Stars on 7 August and Seattle Reign on 10 August.

The Oakville, ON, native recorded her team-best third assist of the season on the game-winning goal by midfielder Lupita Worbis in the 58th minute last Wednesday against the Red Stars in the Spirit’s first home win of the season.

The victory snapped a seven-game losing streak and ended a run of 13 games without a win for Washington.

Three days later, the Princeton graduate scored the only goal of the game – and her eighth goal of the year – in the 83rd minute versus the Reign. Matheson’s eight goals are a team high and tied for fourth in the NWSL.

She is the first Spirit player to win the NWSL Player of the Week award.

The NWSL Player of the Week is selected each week of the regular season by a selection of journalists that cover the league on a consistent basis.