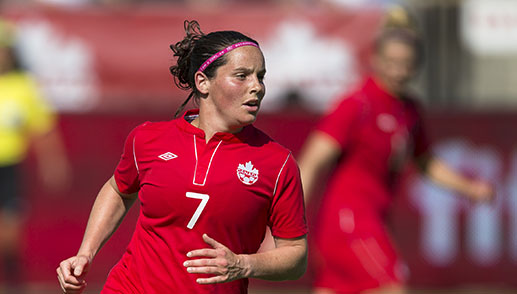 Wilkinson inducted to University of Tennessee Hall of Fame

Wilkinson has scored seven times in her 142 appearances for Canada and was a member of the Canadian team that won a bronze medal at last year’s Olympic Games in London.

For more than a decade, Rhian Wilkinson has been a key part of the back line for Canada’s Women’s National Team.

But prior to making her debut in 2003, Wilkinson was an integral part of the University of Tennessee Lady Vols team from 2000-2003 and her alma mater is acknowledging Wilkinson’s contribution to the program by including her in the 2013 Lady Vols Hall of Fame Class.

Wilkinson is one of four inductees from five sports that make up the 13th group of inductees for inclusion in the Hall.

“These women and their accomplishments are worthy of this special recognition,” University of Tennessee Vice Chancellor/Director of Athletics Dave Hart when the inductees were announced early last month.

“Two members of this year’s class are Olympic medalists; all four have earned All-America honors and their addition to this prestigious group of women is a testament to our history in women’s athletics. We look forward to the induction weekend.”

Wilkinson has scored seven times in her 142 appearances for Canada and was a member of the Canadian team that won a bronze medal at last year’s Olympic Games in London.

A decade after her graduation, she still ranks amongst the leaders in many statistical categories in the Lady Vols program, including first in career assists (32) and single-season assists (15), second in career points (88) and third in career goals (28).

The induction ceremony takes place on 8 November in Knoxville, TN, USA. For more information, visit the University of Tennessee