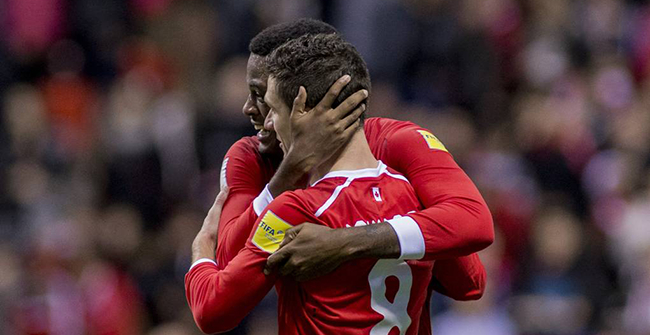 Canada Soccer’s Men’s National Team played 14 international matches in 2015, the most in a calendar year since 2000

The moment — from a Junior Hoilett cross down the left side with two Canadian attackers in the box, a Will Johnson header rolls off Cyle Larin’s back and over the line for a 1-0 lead over archrivals Honduras in 2018 FIFA World Cup Russia Qualifiers at BC Place. Canada explodes into celebration, with captain Julian de Guzman the first to jump his way into Johnson’s arms.

The 38th minute goal was enough to stand as the game winner, a crucial three points to kick off the CONCACAF semi-final stage on Canada’s Road to Russia 2018. At the heart of victory was Canada’s always-chanting 12th man, the 20,108 fans who packed BC Place in support of #CanadaRED.

Said Johnson after the match, “the crowd was fantastic. It was probably the best Canada crowd in front of which I have played in my career. The fans were unbelievable tonight. It was a real treat to come in and see a lot of red everywhere.”

In FIFA World Cup Qualifiers, Canada won their two-match series against Dominica (June) and Belize (September) before collecting four points (a win and a draw) in the opening two matches of the CONCACAF semi-final stage. Canada won 1:0 over Honduras on 13 November, then drew 0:0 away against El Salvador on 17 November.

The six-match round continues in 2016 with a home-and-away series against Mexico in March (including the 25 March home match at BC Place) and then an away match in Honduras and home match against El Salvador in September.

Atiba Hutchinson was Canada’s man of the match in the victory over Honduras. In 2015, he played four matches at the international level and scored one goal (at home against Belize), while he has also helped club side Beşiktaş JK hold down first place in the 2015-16 Turkish standings. At year’s end, Hutchinson was a BMO Canadian Players of the Year winner for the fourth time, tying the mark held by former star Dwayne De Rosario.

Head coach Benito Floro featured 55 different players over the course of the year, with De Rosario making his last two appearances before retiring as Canada’s all-time leader with 22 goals in 81 international matches.

Canada’s captain Julian de Guzman, meanwhile, became the country’s all-time leader with 85 international appearances, surpassing the previous mark held by Paul Stalteri (84). At the other end of the all-time list, 14 different players made their first international appearances in 2015, including Junior Hoilett who earned Man of the Match honours in his debut against Ghana.

Leading the charge in attack, Tosaint Ricketts was Canada’s leader with five goals in 12 matches, while Cyle Larin finished second with four goals in 11 matches (including the one famous goal off his back). Larin was runner up to Hutchinson in voting for Canadian Players of the Year honours, while at the club level he was MLS Rookie of the Year after scoring 17 times in 26 league matches.

In goal, Milan Borjan led the way with five clean sheets (including both November matches in FIFA World Cup Qualifiers), while Kenny Stamatopoulos was second with four clean sheets (while winning Team MVP honours at the CONCACAF Gold Cup).

From their positive performance in November, Canada’s success story will be to continue their winning ways into 2016, with a massive home match against Mexico on Friday 25 March. With a good home crowd, Canada hopes that 12th man can propel the team beyond the semi-final stage and into the CONCACAF “Hex”.