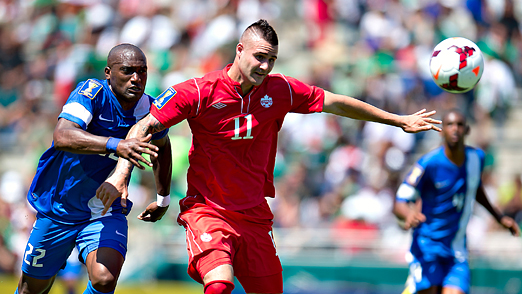 Young Canada side set for clash with CONCACAF giants

Canada arrived at the 2013 CONCACAF Gold Cup with one of the youngest sides at the tournament – and the team will head into Thursday’s group encounter with Mexico, CONCACAF’s number one side, even younger still.

Captain Will Johnson and mainstay striker Simeon Jackson have both been forced to leave the team mid-tournament – Johnson returning home to recover from illness and Jackson travelling to Germany to finalize a move to Bundesliga side Eintracht Braunschweig.

“When one player goes down it presents an opportunity for someone else to step into the spot and make a contribution,” said Miller.

“Our players won’t need any extra motivation at all on Thursday.

“We know that any player that puts on a Mexican shirt will be of the utmost quality. Anytime you get to play against Mexico it is a special occasion.”

Canada will take on Mexico in the second of three group-stage matches on Thursday night at CenutyrLink Field in Seattle (local kick-off 20.00).

Mexico, like Canada, suffered an opening-day loss on the first day of the tournament, and Miller knows that this is likely to add extra urgency to the Mexican cause.

“In a sense, it will be like we are playing a wounded animal,” said Miller.

“Mexico will be feeling the pressure and they know they will need to get a result. We are also anticipating that there will be a strong contingent of Mexican support at the match – so by no means are we underestimating the magnitude of the challenge.”

Miller, who captained Canada during his playing career, was noted for his determination in midfield – and the Canadian boss is looking to his players to put in a similarly committed performance against the best team in the confederation.

“Everything we have to do starts with the right attitude,” said Miller.

“Discipline in keeping our shape and commitment to the defensive cause is essential when you are playing against a team of this quality.”

The Canadian team are also without striker Randy Edwini-Bonsu who departed camp on Monday due to injury.

The team called-in D.C United forward Kyle Porter on Monday. Porter started training with the team on Tuesday and will be available for selection on Thursday night.

Julian De Guzman will captain Canada in the absence of the appointed tournament captain Johnson.

Following the match against Mexico, Canada will travel to Denver to close-out group play against Panama on Sunday 14 July.