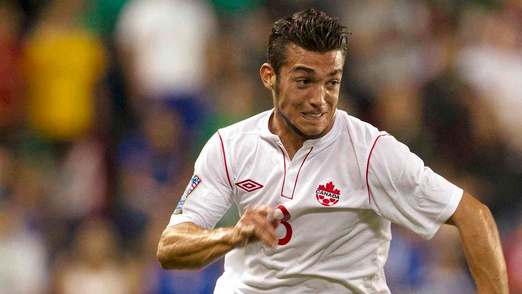 Canada to take on Trinidad and Tobago in a friendly on 15 August.

Canada took part in its first training session on Monday morning ahead of the 15 August 2012 Men’s International Friendly against Trinidad and Tobago. The Wednesday international match will be played in Lauderhill, FL, USA.

With the mid-morning sun beating down on the players, new recruits Doneil Henry, Russell Teibert, Evan James and Lucas Cavallini all featured in the action on their first day of camp with Canada’s national team.

With limited time to make preparations for Wednesday’s match against Trinidad and Tobago, Canadian head coach Stephen Hart wants to use the match to assess the performances of the players battling to get into the team for the resumption of FIFA World Cup™ Qualifiers in September.

“The game will be about looking at individual performances,” said Hart. “We want to see who can fit in and who can gives us some more flexibility in the squad.”

CANMNT: Stephen Hart ahead of Trinidad and Tobago friendly

Canada will square off with Trinidad and Tobago in a Men’s International Friendly at 19.00 ET / 16.00 PT on Wednesday 15 August at the Central Broward Regional Stadium in Lauderhill, FL.

There will be no television broadcast of the match but fans will be able to follow the match on Twitter: @CanadaSoccerEN. Extended highlights of the contest will be uploaded to CanadaSoccerTV following the game.

Fans can also keep up to date on Canada’s progress at CanadaSoccer.com; and at Facebook.com/CanadaSoccer.

Canada resumes play in FIFA World Cup™ Qualifiers action against Panama on 7 September (19.00 local) at BMO Field in Toronto. Tickets to the match are available at Ticketmaster.ca or by phone at 1.855.570.7500. Ticket purchases for groups of 10+ can be coordinated through the Canadian Soccer Association’s marketing department: marketing@soccercan.ca.