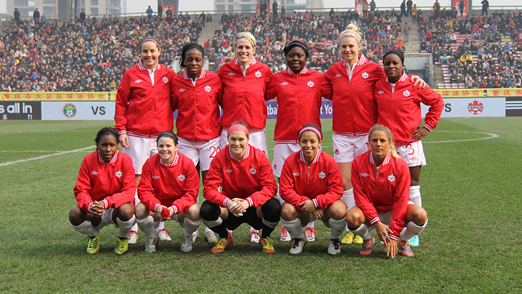 Adriana Leon scored her first international goal to lead Canada to a 1:0 win over China PR in the opening match of the 2013 Yongchuan Cup in Yongchuan, China.

Canada held firm during an early spell of pressure from China PR and rebounded with an assured second-half performance that was capped off by Leon’s goal in the 75th minute.

Leon, one of six players who earned their first senior caps on the day, intercepted a stray pass and charged to the edge of the penalty area before unleashing a firm drive past the Chinese keeper.

Head Coach John Herdman had stressed to the media in the build-up to the tournament that Canada could struggle to find its feet as the team readjusts to begin its long-term preparations for Canada 2015 – but he was presently surprised by the composure of the team’s young players.

“I didn’t think we would come this far today,” said Herdman following the match at the Yongchuan Olympic Center.

“China could have scored a couple goals in the first half if we’re honest, but in the second half we took the performance.

“There was some really good football played in the style we’ve been working on. It was a good step forward.”

Canada currently occupies second place at the Yongchuan Cup after the opening-day win. The Canadians will next take on Korea Republic on 14 January before closing out the round-robin competition with a match against Norway on 16 January.

Norway defeated Korea Republic 2:0 in the day’s other game.