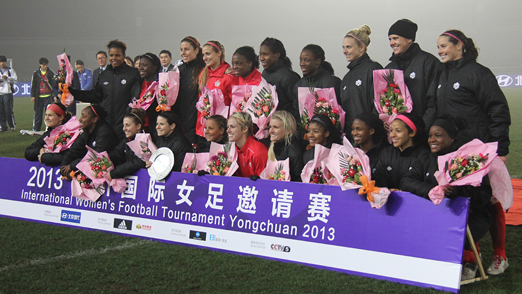 Canada Women’s National Team draws Norway 0:0 to finish second in its first competition of the year.

Canada’s Women’s National Team battled Norway to a 0:0 draw in the final match of the 2013 Yongchuan Cup.

Head Coach John Herdman was pleased with the effort his team put forward in the final match that, again, featured a host of up-and-coming Canadian talent.

“The players competed well physically against a very strong Norwegian side – and we matched them,” said Herdman after the game.

“All credit has to go to the young players, this tournament has been a good start for Canada, but there is still a long way to go.”

Canada debuted seven new players over the course of the tournament as the team laid the groundwork for the road to Canada 2015.

The Women’s National Team will next be in action at the 2013 Cyprus Cup which runs from 4 to 13 March.