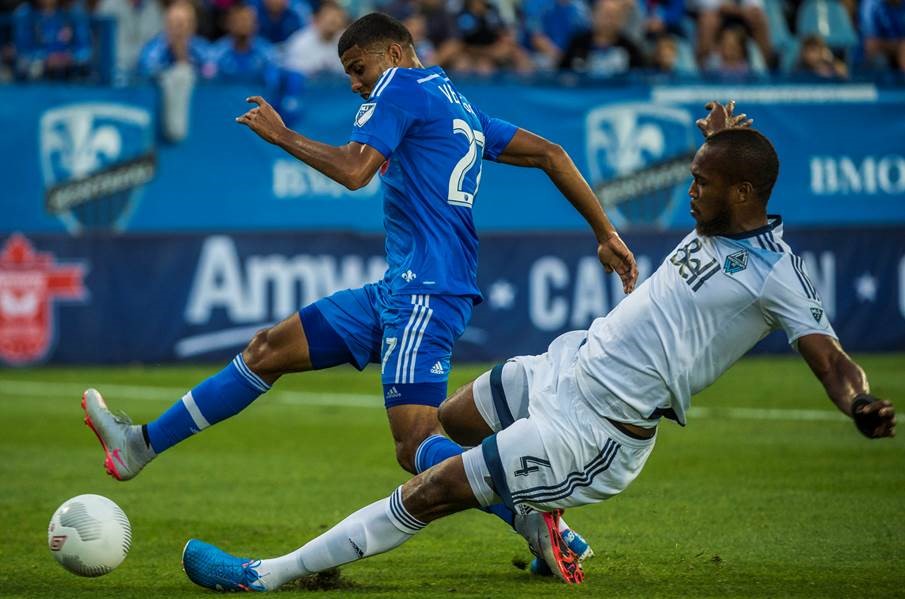 After a scoreless first half dominated by the home team, the Vancouver Whitecaps FC and Montreal Impact offered an explosive second half to spectators gathered at Saputo Stadium on Wednesday night en route to a 2:2 draw in the first match of the final of the 2015 Amway Canadian Championship.

Handcuffed in the first half, the Whitecaps first put their hosts in trouble by scoring twice in seven minutes just after the hour mark.

Darren Mattocks opened the score in the 65th minute, slipping between two defenders at the near post while the Canadian International Kianz Froese made a great run on the left flank before crossing to the net. Mattocks perfectly coordinated its run to meet the trajectory of the ball and deflected it into the side netting at the far post.

Mattocks ended up involved in a way in the second goal as well when he forced the Montreal defender Laurent Ciman to commit a faul on the left of the Montreal area leading to a free kick. Pedro Morales masterfully placed the ball at the near post to beat goalkeeper Eric Kronberg, who appeared stunned by the accuracy of the shot.

Down, but not destroyed, the Impact players showed great strength of character by leveling the score with a pair of goals in two minutes to tie the game in the last 10 minutes of play.

Appointed captain for this match, Ciman powerfully redirected a corner kick from Marco Donadel with a header in the 84th minute to grab one back.

Quickly upon restart, a succession of passes saw the ball go by Andres Romero, to Justin Mapp to Anthony Jackson-Hamel who took advantage of a Jordan Harvey fall to send the ball into the ropes.

It was a first goal in the professional ranks for the young Canadian.

Montreal finished the game with 20 shots, including eight on target, against four shots, all on target for Vancouver.

Coach Carl Robinson took advantage of the team returning from a break to introduce Christian Dean in the game instead of Diego Rodriguez. Gershon Koffie jumped onto the field in the 68th minute in place of an injured Laba.

The two teams will meet for the return leg of this final on Wednesday, 26 August (22.00 ET / 19.00 PT) at BC Place in Vancouver. The winner will represent Canada in the 2016/17 edition of the CONCACAF Champions League.