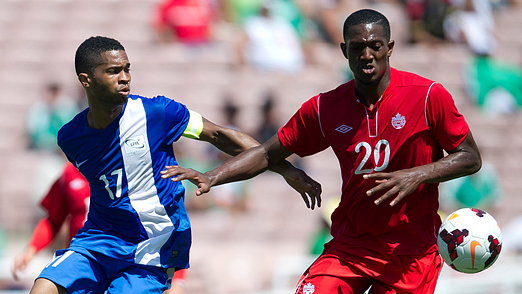 Seven players have made competitive debuts at tournament.

Interim Head Coach Colin Miller has stressed his point to the Canadian media from day one – that the 2013 CONCACAF Gold Cup represents the begin a of a long rebuilding process for Canada’s Men’s National Team – and the former Canadian captain has stayed true to his word.

Miller has granted competitive debuts to seven new players at the tournament as the country continues its generational transition with a view to the next cycle of FIFA World Cup™ Qualifiers looming on the horizon.

Within the group of competitive debutants selected by the Canadian coach, there is an average age of just 20-years-old.

With injuries, illness and precarious club situations forcing a number of the team’s veterans out of the tournament, Miller has shown faith in his young squad members, playing some of the youngest players in key positions for significant minutes.

“It is quite remarkable to think that we played against Mexico yesterday in a Gold Cup match with a 20-year-old centre-back, two teenagers in midfield and another player who, at 21, was making his first start for Canada,” said Miller.

“Playing in from of 28,000 fans in Seattle – I thought the young players handled that occasion very well. I was proud of them.”

After a last-minute opening day loss and Thursday night’s defeat to defending champions Mexico, Canada now find themselves up against it at the Gold Cup, needing a win on Sunday against Panama to put themselves back in the mix to qualify for the knock-out stages.

Even if Canada do pick-up three points against the Panamanians, they are by no means assured of progression at the tournament and will have to rely on help from elsewhere.

Despite the adverse conditions, Miller simply seems another pressure-packed Gold Cup encounter as a positive learning experience for his up-and-coming squad.

“Sunday’s match against Panama is another terrific opportunity for them,” he said.

“The way that certain individuals have performed at this tournament – and if they can continue to challenge themselves and grow as professional footballers – gives us hope and optimism for the future of the Men’s National Team Program.”