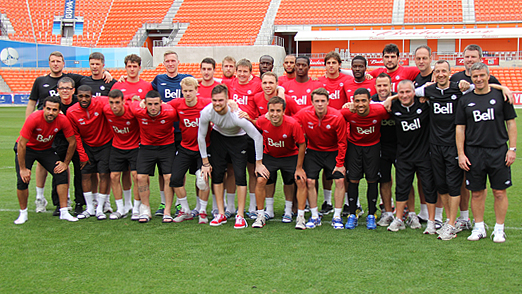 Youthful Canadian side ready for battle with USA

Looking to bounce back from a season-opening loss to Denmark, Canada will take on USA in a Men’s International Friendly at BBVA Compass Stadium in Houston, TX on Tuesday 29 January (local kick-off 20.00)

“The best way to get over a poor result is to get back on the pitch as soon as possible,” said interim Canadian Head Coach Colin Miller.

“We get that opportunity on Tuesday night against a very good USA side.”

The match will be televised live in Canada on Tuesday night on Sportsnet West and Sportsnet ONE (21.00 ET / 18.00 PT). Fans can also follow the match live on Twitter: @CanadaSoccerEN; and can enjoy full pre and post-match coverage on CanadaSoccerTV.

As with any Canada-USA fixture – Miller has indicated that there will be something special on the line when the two teams do battle in Houston.

“It’s a local derby, so it’s something to look forward to,” said Miller.

“If the players need motivating for a match like this, there is something seriously wrong.”

Canada enjoyed a strong year against the Americans throughout Men’s competition in 2012, beating their rivals to the south in matches at the U-20 and U-23 age groups; as well as holding the US MNT to 0:0 draw on 3 June at BMO Field at the senior level.

That is not to say that tomorrow’s derby is simply about the result.

Canada will continue to give opportunities to its young players as a long-term rebuilding process is underway – with a view on giving international match experience to the future leaders of the senior program.

Canada’s squad for the team’s January camp is the youngest assembled since 2006, and coach Miller granted senior debuts to six different players in Saturday’s loss to Denmark in Tucson, AZ.

A similar youth-oriented approach is expected on Tuesday night.